What do the lights on a Sterling alternator controller mean?

On Jubilee there is a Sterling "advanced digital four step split charge alternator to battery charger". Even though I've read the instruction leaflet I'm still not sure exactly what it does. Jubilee has two alternators, each of which connects to the Sterling device. There are outputs to both the starter battery and the domestic battery bank. Visible through a window are several LED indicator lights, but there is a large amount of parallax error when trying to line up the LEDs with the legends on the case, as I've illustrated with the photos. 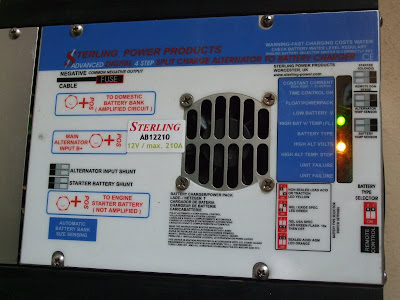 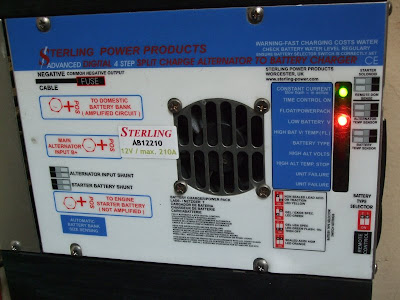 In both photos the same LEDs were on. To make it more complicated, some of the LEDs appear to be multicoloured. What do the colours mean?
Posted by Halfie at 22:30

But so long as none of the magic blue smoke has leaked out, then it will still work!

Peter, thank you, I'll have a look.

Having read your blogs for a considerable period, very often without comprehension of the problems you have encountered or the solutions you and your fellow boaters have found, it seems to me that the owner of a narrow-boat must be an engineer, electrician, plumber, mechanic, carpenter and master/mistress of much else besides. Would you not agree?