Ribbon cut to launch Canal and River Trust in Birmingham

Shortly after ten o'clock this morning two trip boats loaded up with dignitaries and set off from just above Farmer's Bridge top lock. A police helicopter hovered overhead, but that was most likely because the Queen was in town. Her Majesty didn't, as far as I am aware, visit any part of the Birmingham Canal Navigations. The boats travelled a distance of, oh, a hundred yards, before stopping by a ceremonial ribbon stretched between a towpath bridge and the island at Old Turn Junction.

In the red life jackets were West Midlands Waterways Partnership "Chair" Peter Mathews with the scissors and Lynne Berry, a Trustee of CRT. 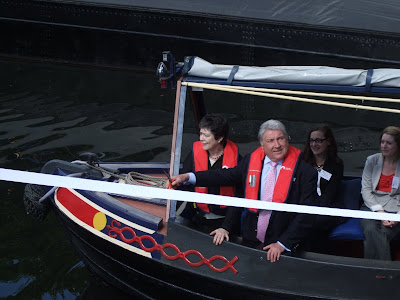 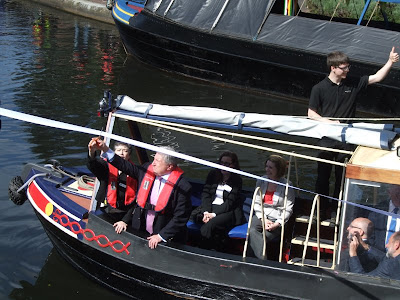 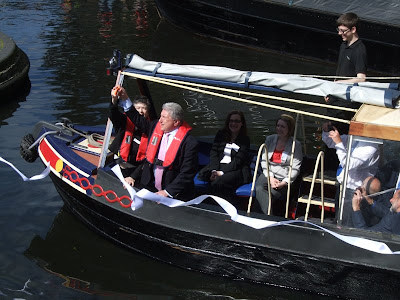 The sun shone, and the couple of dozen spectators clapped politely.

The boats carried on another hundred yards and disgorged their passengers, who made their way to the Ikon centre for a glass of something and a bit of a lecture (or some such - I didn't go in to that bit).

I talked to Peter Moore, whose card says he's the Boating Trade Manager (Midlands); the press officer based at Paddington (Claire?); and Dean Davies, the manager of West Midlands waterways. All were very friendly and were willing to talk about the Canal and River Trust, which has taken the place of British Waterways. I did feel somewhat out of place, though, in my shorts and trainers, among the suits and smart dresses. That's why I didn't go in to the briefing!

Outside was a mini marquee - a gazebo, really - with all the literature ready to sign up members of the public to the CRT. 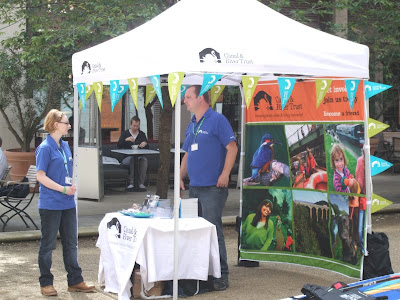 Just before the procession started a CRT worker was carefully hoovering up leaves from the towpath. As if anyone would have noticed or cared! 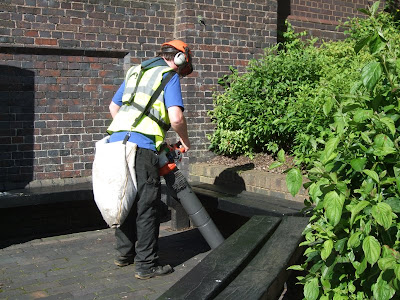 Peter Moore is a good blokie.