Over the last few days I have been building a log store against an outbuilding. Inspired by helping with the reroofing of the outbuilding earlier this year I decided to make it with a tiled roof.

I wanted to use bits and pieces I had lying around. First I nailed together some of the old timbers from the original outbuilding roof to make two frames, one for the back and one for the front. The back one has vertical timbers with four longer horizontal timbers between them. The front frame is two verticals and two horizontals making a rectangle. The verticals are shorter than those of the back frame so that the roof has a pitch.

I added some diagonal battens for strength and joined the two frames together with horizontal battens making the sides. 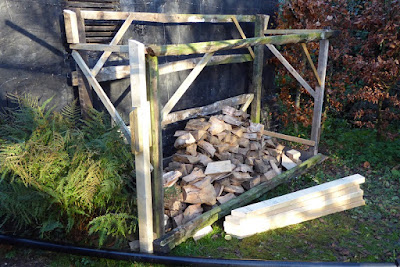 The next job was to construct the roof. Left over from the outbuilding roof I had enough 4x2 to form the rafters. I fixed the two end ones to the frame, having strengthened the left-hand front with another piece of 4x2. Then I nailed battens to the rafters at the right interval for my pantiles - battens, nails, rafters and tiles all left over from the outbuilding roof. These battens also had the effect of holding the three centre rafters in position. 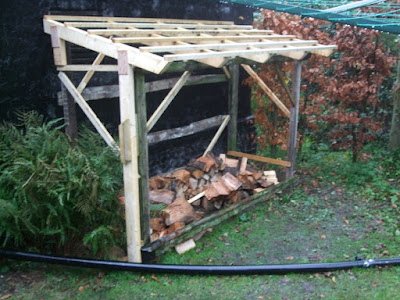 Then, at last, I could lay the pantiles on top. I was getting worried that the front top horizontal timber might not be able to support the weight - the 60 tiles are very heavy - so I nailed another 4x2 under it.

I nailed some more battens on the sides to prevent logs falling out. To finish the job I need to put barge boards on the end rafters to prevent wind and rain getting under the tiles - and to make it look nicer. I couldn't immediately find anything suitable but I'm sure I'll have something somewhere. 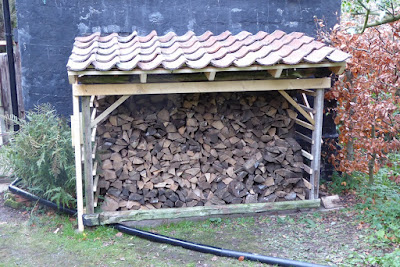 We've already almost filled the store with logs. I'm rather proud of it! I hope the old timbers are not too rotten. Oh, it sits on slabs just laid on the earth.

The black pipe, by the way, is a temporary connection to the downpipe from the outbuilding gutter. A major job for the future is to dig a soakaway for it.
Posted by Halfie at 18:20 1 comment: