Finding out why the bilge pump didn't work - stupid me

On Friday I disconnected the outlet hose from the bilge pump and lifted it out of position so I could get at the impeller. It seemed free enough but still only managed a pathetically slow speed when operated. Hmm. Broken, I thought. We were only 15 minutes by car from Streethay Wharf, so I drove there to buy a replacement pump. £83.90. Ouch! Back at the boat I swapped it over, switched it on and - yes - the same result.

It was only now that I had the bright idea of checking the voltage at the pump. Aargh! Only 6V! No wonder it didn't work! What an idiot! I followed the cables up to the control panel and checked the voltage on the lead from the starter battery whence the bilge pump gets its power. Yup, 6V. Not good for a 12V battery.

I disconnected the new pump, reconnected the old one and powered it from the domestic battery bank. This should be better as the solar panels should keep them charged. I jump started the engine from the domestic bank. It started first time, pleasingly, and we moved the short distance to Fazeley Mill Marina where we used the new Elsan point (viciously strong rinsing jet) and topped up the water.

By the time we'd gone to Fazeley Junction, winded and returned to the mooring it was almost dark. We had to be in Milton Keynes that evening, so we hurriedly packed the car, drained the water as much as we'd done previously and drove away.

Well, now I have a spare bilge pump. I read recently that the cabin bilge should also have a pump - has anyone done this?
Posted by Halfie at 21:00 5 comments:

On board: good news and bad news

We drove over to the boat this afternoon to find ... no apparent faults with the domestic water system. Hooray! It seems to have survived the winter so far.

But ... I found some water in the cabin bilge and a very damp bung. The bung is a disc of the floor cut out to form the inspection hatch. Worse, I tried operating the engine 'ole bilge pump to find that it made a pathetic small noise - and then nothing. As the canal doesn't seem to be emptying into the bilge at the moment I shall investigate properly tomorrow. If it can't be resuscitated I still have the old pump. I replaced it only last year as it was getting noisy. Hmm - it should still be under warranty (but will I be able to find the receipt?)

No photos, sorry. I'm doing this on my telephone.
Posted by Halfie at 19:47 3 comments:

The end of navigation - and the end of the road for Moley?

Sounds a bit dramatic, doesn't it? But that's what the sign says. (Not the bit about Moley.) 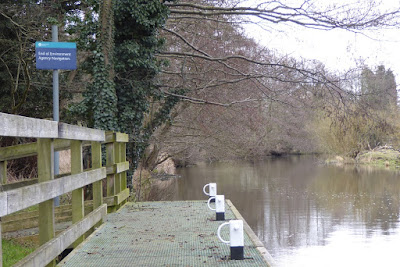 OK, it actually reads "End of Environment Agency Navigation", so it's not forecasting the end of the world as we boat it. We were in Brandon, Suffolk, today (not by boat), walking along the River Little Ouse on another recce for a regional BCF gathering on Saturday week.

Attached to the mooring pontoon was a notice written in the local lingo. 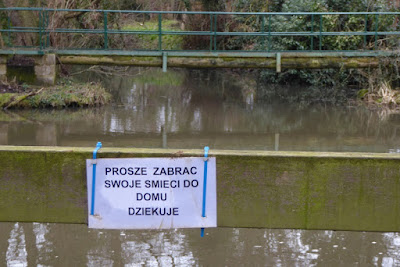 It's in Polish and - according to Google Translate - means "Please take your rubbish home, thank you".

On our walk we came across a man in a hi-vis jacket with a long-handled four-pronged device. He had been creeping gently forward amongst fresh molehills on a playing field before coming to a complete standstill. 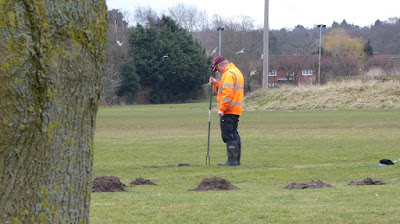 He noticed me taking this photo but ignored me and didn't move. I had never before seen a mole catcher in action - if "action" is the right word. After a while nothing happened and we moved on, completing a very pleasant walk.
Posted by Halfie at 21:20 No comments:

What a difference three days makes! We've been basking in double-digit (just) temperatures today and the snow is going fast. It was only yesterday that our local Tesco Express received its first delivery of milk for a while - the shelves had been bare for four days.

Two days ago many houses had spectacular icicles. I had hoped to provide an example or two, but the computer is on a go-slow and isn't playing ball. Unless it's a Blogger problem whereby it won't upload images. Here they are. 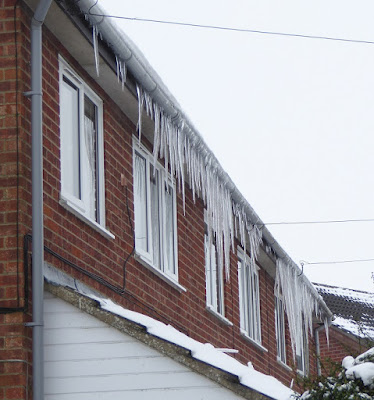 Jan said something the other day which made us both think about Jubilee - effectively abandoned by us since the last time we were there in January - and its calorifier. The mild winters of the last few years have lulled me into a false sense of security and I realise that I didn't properly winterise the boat. I suppose I thought that we'd just drive over and do the necessary if the weather got cold ... but it all took us rather by surprise.

One good thing is that our friends David and Mary have checked the boat today and all seemed to be well, so I hope we don't find a ghastly split in the calorifier when we go ourselves later this week.

Updated with photos
Posted by Halfie at 22:03 No comments:

Er ... hello! I'm back. It's been a while, but I'm hoping to renew my blogging energy and get going again. There was a lot happening in our lives and I let this slide. I suppose I was enjoying the extra freedom I found by not feeling obliged to update the blog, and once I got out of the habit ...

Anyway. I'm sure you're up to your neck in snow pictures, but here are two I took from our house. First, this from the back: 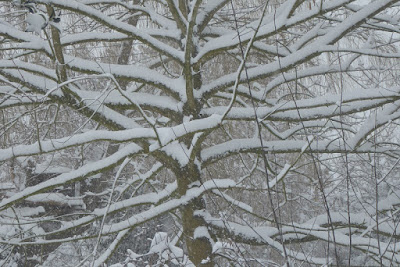 and then a white-out down the driveway. 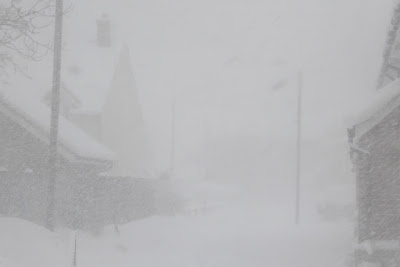 Both photos were taken on Wed 28th Feb 2018. I measured 9" of snow here in Norfolk; today the thaw has set in with the temperature reaching a balmy 8.1 C. Oh, and it's been raining all afternoon and evening so far. The garden is still white but already patches of grass are showing through.
Posted by Halfie at 20:06 4 comments: