Jubilee fails BSS on lack of flame trap (then passes)

Last week we went to the boat to prepare for the Boat Safety Scheme examination. This was the first time we had had to arrange one, so I didn't really know what to expect.

The examiner arrived at 1000 on Thursday and spent four hours on board. He failed the boat within seconds of starting his inspection - oh no!

The fuel tank vent, which comes up through one of the dollies, had no flame trap. I hadn't known - I didn't know what to look for. All was not lost, however, as the examiner suggested that a tea strainer could supply gauze of the right size. Unfortunately we didn't have one, having succumbed to the convenience of tea bags some years ago. But Jan was in Wolverton visiting Ally and Josiah, so she was able to buy one and bring it to me.

The brass vent cap has two circular holes a few millimeters in diameter which are supposed to hold discs of wire gauze held in place by tiny circlips. We discovered the remains of one original gauze; here it is by the vent cap. You can see one of the new gauzes and its circlip in the vent. 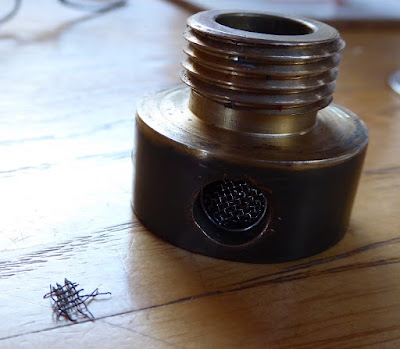 Jan had come up with four different size tea strainers; I used the one with the finest mesh (as approved by the examiner). It was quite difficult to cut, even with my side cutters.

One other item was initially failed. There seemed to be no fuse in the lead from the starter battery to the bilge pump, but I carefully followed the cable and found that it went via a circuit breaker next to the bilge pump switch on the instrument panel. Once I had pointed this out to the examiner he apologised and said that was fine, and the boat would pass. Hooray!

These days you don't get an actual certificate; like a car MOT you get a printout with the details. Only I didn't even get this; I received an e-mail for me to print out.

Another cold morning. The sun got to work burning off the frost; this is next door's land seen from our garden. 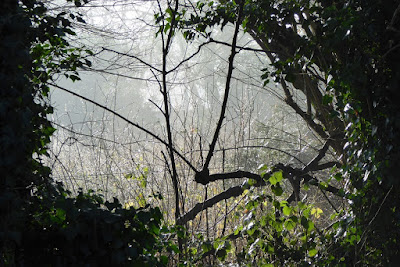 I hope our boat's OK in this cold weather, all unlived in in the marina. I understand it's going to get milder later this week (phew!); meanwhile I expect there's a certain amount of ice breaking being done by any boats on the move.

Ally visited the boat briefly today in order to close the internal door between the engine room and the rest of the boat. I had forgotten to shut it when leaving a week ago; with it open there's not much protection from icy blasts around the back doors (and coming through the vents). We have a thermostatically controlled fan heater in the cabin, set to minimum, but there's no point heating the outside.
Posted by Halfie at 19:46 1 comment:

Forced ventilation for the fridge

On the boat the other day I made a bit more progress in my quest to make the fridge more efficient. I had already cut a hole in the floor under the fridge's radiator; and cut a ventilation grill in the panel immediately behind the fridge. Now I have added a small 12V fan in an attempt to blow the warm air from the radiator. 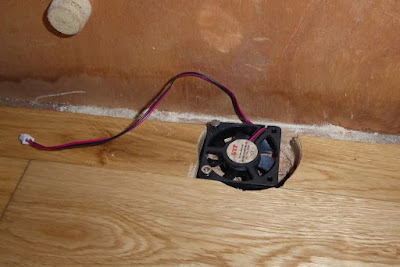 At the moment this relies on me connecting the fan to 12V and switching it on and off manually. A quick look at the back of the fridge shows me that a direct connection to sense when the compressor cuts in won't be easy, so I'm considering either a noise sensor or a heat sensor to tell the fan to come on.

The fridge is by far the biggest drain on our domestic batteries. If this doesn't work I might have to spend a small fortune on buying a 12V fridge, surely more efficient than running the 3kVA inverter and the mains fridge.
Posted by Halfie at 23:06 7 comments: