Have you seen the Crick Ness Monster? We haven't seen it, but we have heard it. It woke us up one morning a couple of weeks ago in Crick Marina, thrashing about between our boat and a neighbouring one, making a frightful racket.

Later in the morning I heard it again as I was walking along the jetty. I looked, but all I saw was a few ripples on the water.

What was it? All will be revealed - possibly - later.

We were at Crick making use of our month's free mooring won as a third prize at last year's Boat Show. Our stay conveniently coincided with this year's show, so we claimed our moorers' wristbands and helped out at the Boaters' Christian Fellowship stand.

I don't think there were as many visiting boats this year. This was the view looking north from the temporary bridge. 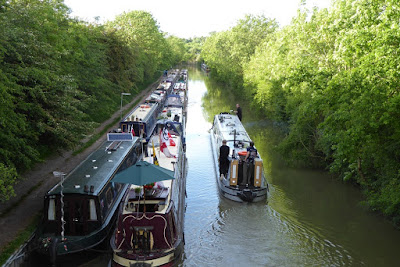 The headline act for Saturday's evening entertainment was the tribute band T-Rextasy. I stuck it out for their first three numbers but that was enough for me. 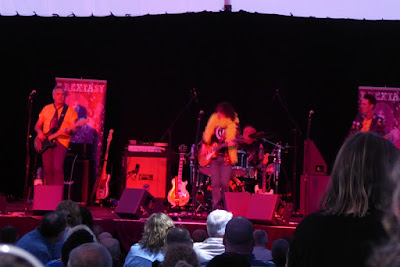 I didn't even bother going to the next night's gig, Fleetwood Bac. I could hear enough from the boat.

Back at the BCF stand, here Jan (seated, dark green T-shirt) is signing up a new member. 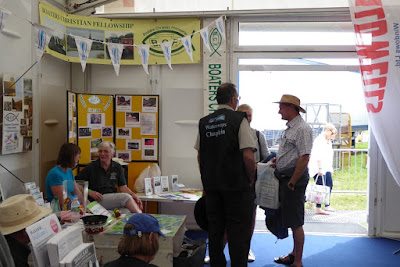 During our stay at Crick we made good use of our proximity to the M1, driving to Sheffield to see Andrew a few times. Now we are on the move again, heading towards Birmingham. We tied up just along from Norton Junction in surprisingly shallow water on the GU main line.

Back to the Crick Ness Monster. A few days ago a fellow marina dweller told us that it could have been a large carp which visits at this time of year to spawn. I was not totally surprised, but part of me felt slightly sad that the mystery had been blown out of the water, so to speak.

There is lots more news, and I shall try to get back into more regular blogging after a regrettable lapse.
Posted by Halfie at 23:30 No comments:

In Norwich last Friday it looked as if the Moon had come in to land. 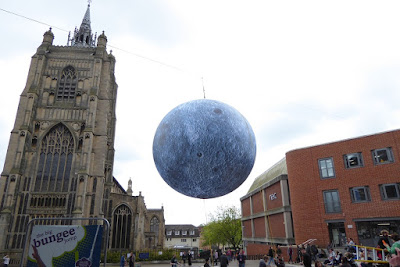 As part of the Norfolk and Norwich Festival a large inflatable moon, perhaps 20 feet diameter, was suspended between the Forum and St. Peter Mancroft church. It didn't stay there long. An hour later it was in a collapsed heap on the floor of the Forum. 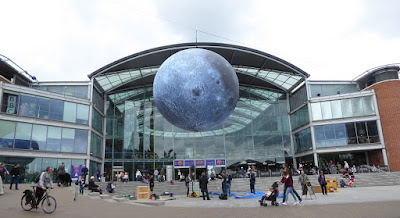 Where we are for a while

In my list of good things about Crick Marina a couple of days ago I forgot: free wifi! (if rather sporadic) and dry dock!

This is where we are, in a newer part of the marina. Jubilee is the third from the left. 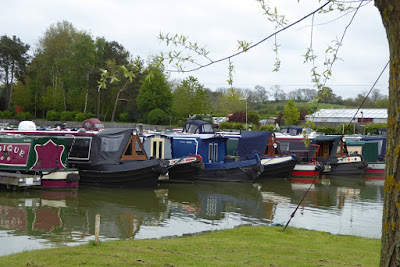 We'll be returning home and to Essex for Jan's mum's funeral shortly, so we're grateful we can leave the boat here.
Posted by Halfie at 12:44 No comments:

We are on board again, at last. Various family events have forced us to change our original plans; we now find ourselves at Crick Marina for a while.

We went to pick up the boat from the boatyard after having the work done, and then decided to get them to do another little job, that of fixing a tiny leak from the area of the fresh water tank. I was rather taken aback when I got the bill - apparently it had taken 13 hours to sort out the problem! Yes, it included a plate being welded to the well deck for the water filler neck to be reattached, but at £40 an hour, plus VAT, this was almost the same cost as the earlier work. That was the removal and refitting of two windows and a mushroom vent, replacement of a gearbox oil seal and the engine coolant, and a small weld repair to a pigeon box flap.

Also, annoyingly, as we'd had to leave the boat at the yard for so long, the paintwork on one side has been splattered with old bitumen from a boat being pressure washed. I made a start on polishing it off - ordinary washing wouldn't touch it - but it is extremely laborious. I've had to resort to T-cut. And the roof in the area of the pigeon box welding is covered in tiny rust specks. Grr.

On the plus side it's making me polish the boat. And, making use of our third prize of a month's free mooring won at last year's Crick boat show, we're in the splendid Crick Marina. With facilities! We are not used to such luxury, having moored at Thrupp Wharf Marina for the last three winters. Here there is an Elsan point! An office! Loos, laundry facilities and a shower! Book swap! Somewhere to get post forwarded to! Diesel, coal and gas! Village with shops and post office within walking distance! And the cost of a mooring here is the same as what we were paying at Thrupp Wharf. We like it here.
Posted by Halfie at 21:40 No comments: