Hearing River Canal Rescue's boss Stephanie Horton on the radio this evening, telling of her close shave when the Stafford fireworks building exploded, reminded me that I'd taken a photo as we went past on the Staffs and Worcs Canal in July. 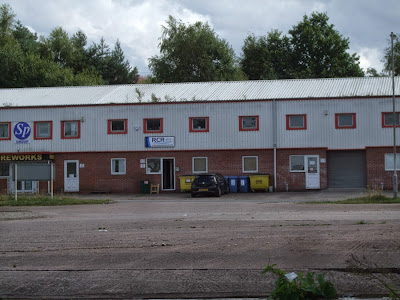 RCR is right next door to the fireworks unit, which blew up yesterday. Tragically, two bodies have been recovered. 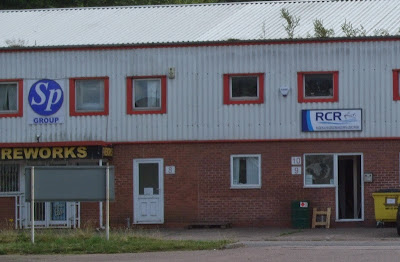 Ms Horton told of the suddenness with which her offices filled with smoke; I believe I heard her colleague saying how he broke a door down in the rush to escape.

As far as I know, the RCR staff survived unscathed. I imagine the building is a bit of a mess, though.
Posted by Halfie at 21:11 No comments:

Back on board the shrinking boat, and an encounter with "grease bug"

We drove to Milton Keynes yesterday, having called in at both sets of parents in Essex on the way. It was good to be back on Jubilee. There were no surprises, unless you count the absence of leaks a surprise. Before leaving the boat almost three weeks ago I ran some silicone sealant around one more window frame from which the occasional drip had emerged in the past.

The boat has started its annual contraction, leading to doors needing more effort to close. Do all steel-cabined boats do this? I assume it's a combination of the steel shrinking slightly with the cooler temperatures and the woodwork expanding slightly with the increased dampness.

We cruised to Galleon Wharf in Old Wolverton today, but returned to the marina this evening just before dark. We have to be back as we're helping on a Canal Clean-up day tomorrow; and then Jan has a Boaters' Christian Fellowship committee meeting to attend on Saturday. We would rather have been on a towpath mooring, but it's easier to be where the car is without a lot of shuffling.

I'm looking forward to tomorrow's clean-up: we're doing the section of the GU from Fenny Stratford Lock to The Globe at Linslade. I don't really know what to expect as I haven't done it before, but I imagine there will be a certain amount of grappling hook lobbing and hauling out of the usual ferrous detritus. I understand that there will be some vegetation tidying too.

Before pootling down the cut today I cleaned out the engine bilge and the bilge under the stern gland. The former was straightforward; I used the top half of a plastic four pint milk container - the part with the handle - to scoop out the water/oil, then finished off with an old sponge. I put the drainings into more old milk containers. The bilge under the stern gland was rather more difficult to clean. There seemed to be a skin on top of the rusty water and, indeed, there was. It was disgusting. I was able to pull up great goopy strands of a jelly-like substance. Was this some form of bug gone mad? There was a certain amount of oil there from the grease exuded from the stern gland - were conditions right for grease bug? There was no way I was going to get the stuff on my camera, so no photos, unfortunately.
Posted by Halfie at 22:00 No comments:

Is it really two whole weeks since I last blogged? I've been taking a little break from it, having got back to the marina, and then to Norfolk. We've been home just over a week now, and already the summer's boating seems hardly more than a distant memory. Perhaps today's autumnal weather - much cooler than the superb weather we had on the boat - has something to do with it.

Before we left Jubilee we cleared the worktop so I could oil it. I also pulled out the fridge so I could have a look underneath with a view to making some holes in the floor underneath the back of the fridge for extra ventilation. It's in rather an enclosed space, with barely an inch gap between its top and the underside of the worktop. so I'm considering introducing even more ventilation in the half bulkhead above the table. 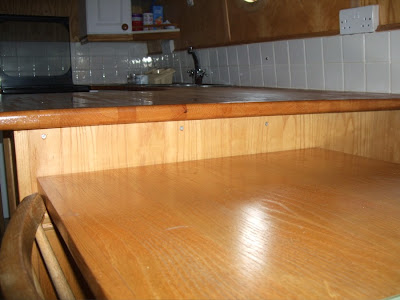 There's about three inches between the top of the table and the overhang of the worktop, but I have to allow for a substantial worktop-supporting batten which is fixed to the other side of the bulkhead. You might be able to make out three fixing screws just below the worktop. I was thinking of a horizontal slot with perhaps a mesh grating, but it must somehow be recessed as the table needs to be able to be lifted off vertically before removal. The table has two metal pins which protrude by about an inch underneath, which engage into holes in a batten fixed this side of the bulkhead (hidden by the table in this photo).

What do you think? It has to look pretty. How about a simple 3/8" slot running the length of the fridge? I believe a tool called a router is what one would use, but my woodworking skills are very basic and I don't want to ruin anything!

Alternatively, having cut a hole in the floor, I could install a computer fan arranged to blow cool "bilge" air past the back of the fridge. Ideally this would come on only when the compressor is running; I'd probably have to wire up a mains actuated relay (it's a 230V fridge). To keep it simpler I could switch the fan manually. It could run during the day and be off at night.

We've actually been switching the fridge itself off at night as Jan claims the noise it makes keeps her awake. Despite summer's heat this didn't seem to affect the contents too much. We had to throw away a couple of pints of congealed milk one day, but that was about it.
Posted by Halfie at 22:30 4 comments: