The ladies of Lynn

On 15th November 2016 we visited King's Lynn for the first time, enjoying walking round the old town and looking at the docks. It would have been fun to have parked in West Lynn, on the west of the River Great Ouse, and taken the ferry across to the town. 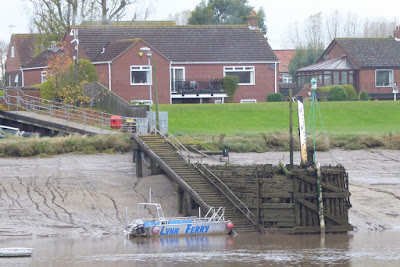 Here it is, making a crossing for just one passenger, by the look of it. 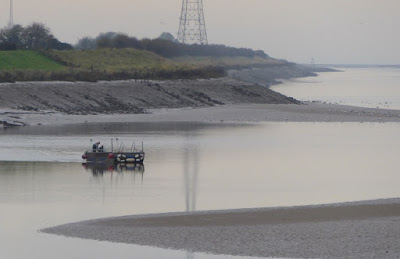 It was good to see that King's Lynn is still a working port. In Bentinck Dock were Lady Alida ... 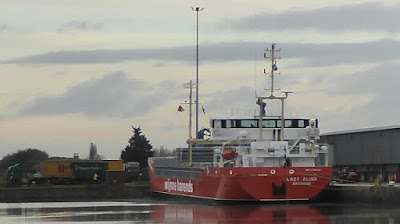 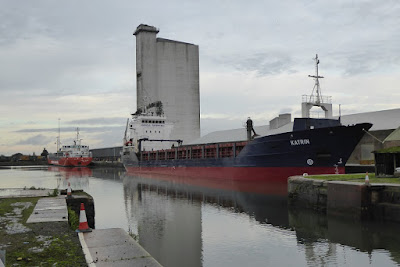 At the silted-up end of a channel sat a number of wrecks. 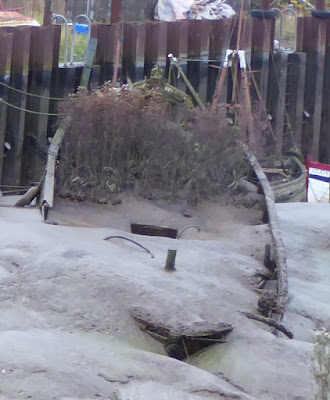 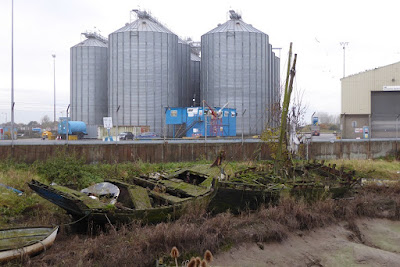 If only the rest of the boat below were in as good a condition as the registration number. You can see several boats in rather better nick in the background. 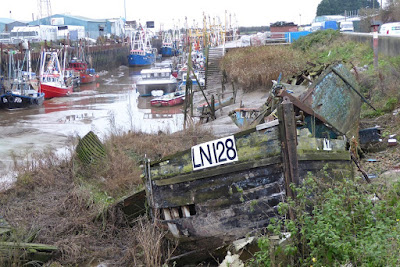 A man is looking into it. 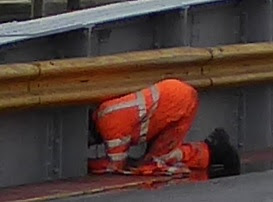 Timber is one cargo handled here. Presumably on its way in, not out. 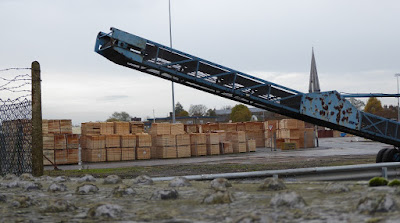 I mentioned Lydia Eva yesterday. She is not actually in King's Lynn, although she was launched there in 1930 and came straight to Great Yarmouth. 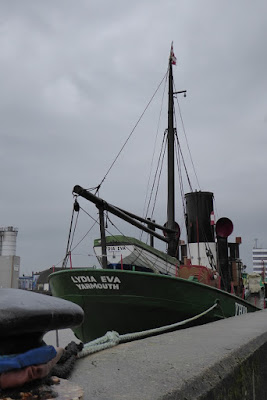 Lydia Eva joined the herring fishing fleet and was later used in war work. She is now restored and back in Great Yarmouth as "the world's last surviving steam-powered herring drifter". 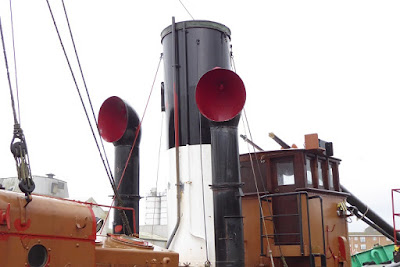 14th November 2016, the southern outskirts of Sheffield. On a walk with Andrew and his dog, Caspar. We climb a grassy slope ... and come across this. 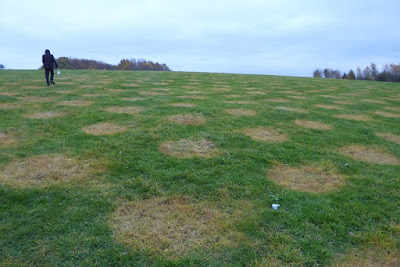 I don't think we're in crop circle territory here, but what are these strange discolourations? At intervals there were short narrow strips of earth with a line spray-painted along them. 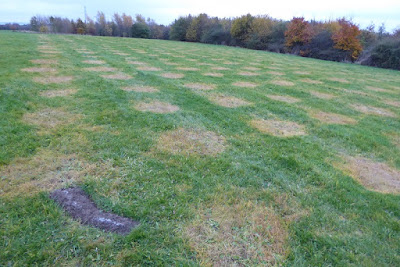 I can only think that this area has been marked out for tree planting, the circles indicating where the trees should go.

I didn't get a shot of Andrew, Jan and Caspar from the front, so this will have to do. 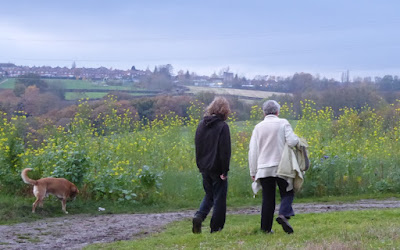 Some of the walk was very muddy. This photo doesn't really show how bad it was. 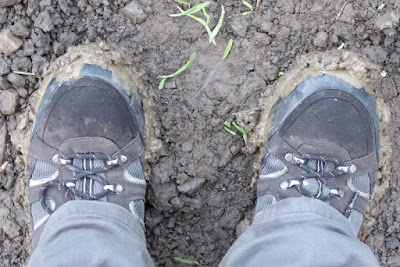 My shoes weighed three times normal until I could scrape most of the squidgy mud off.

In the evening we went to the Flaming Grill pub in Ridgeway where Andrew did his best to get through this ... 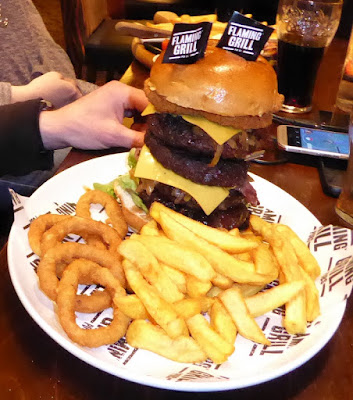 ... a quadruple cheeseburger. He almost managed it. 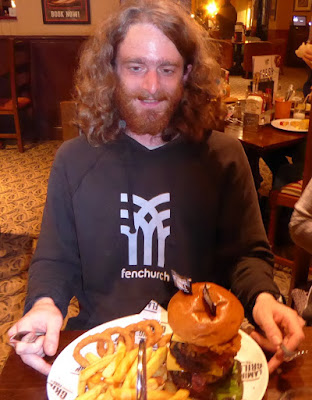 Coming next on this blog: Lady Alida, Katrin and Lynn. Find out who they are tomorrow - and no, they are not former girlfriends. Oh yes, Lydia Eva too.
Posted by Halfie at 20:00 1 comment:

On 13th November 2016 many family members were in Milton Keynes for our grandson's dedication. 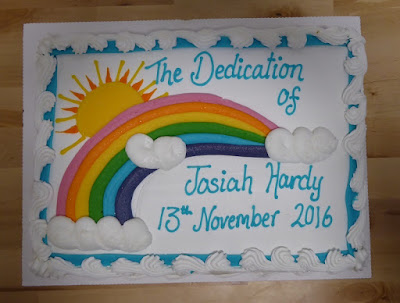 This is similar to a Christening service except that the baby is not baptised but "dedicated" to God with the hope and expectation that he will choose baptism for himself when he's old enough to decide for himself. (It's what we did with our children.)

Josiah, here nine months old, made everyone laugh with his "Baaaa" noises during the ceremony! 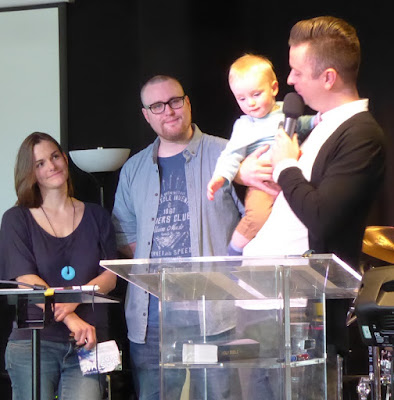 There's a certain amount of artistic licence in the design of the cake (that's the top photo, if you hadn't guessed), but it's nice and colourful.

In tomorrow's post ... strange circles in Sheffield.
Posted by Halfie at 20:04 3 comments:

It's been far too long since my last post. I got out of the habit after returning home; not even Sarah's recent return to Blogland spurred me on.

Is it too late to wish everyone a Happy Christmas? As Christmas has only just started, strictly speaking, I wish you all a Happy Christmas anyway. (If I had my way I would switch on our (very sober) Christmas lights on Christmas Eve, not before, and leave them up until Twelfth Night (by which time most people would have removed theirs).)

I'll ease myself back in gently - with a photo from a walk Jan and I took this afternoon. 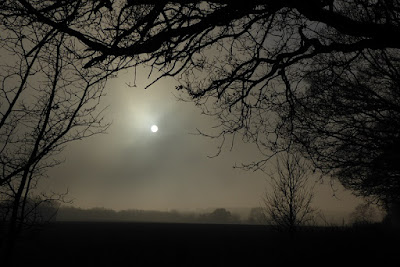 That's the sun struggling to break through a blanket of mist over the Norfolk countryside.

OK, here's another photo. This is from a Boxing Day walk along the south bank of the Thames east of Woolwich. 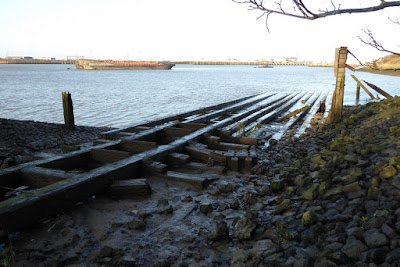 According to my brother, David, this ancient slipway was used to launch Henry VIII's warships. I couldn't find anything on the internet to back this up; can anyone confirm this?
Posted by Halfie at 21:59 1 comment: