Jubilee gets a new alternator (and a diesel top-up)

By way of a break from relentless alternator argy-bargy here's a shot from this morning as the Jules Fuels boat prepares to untie and call on us, as arranged, to sell us some diesel. I like to keep topped up during the cold weather in order to minimise the amount of condensation in the tank. 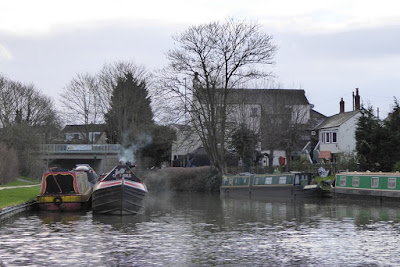 So, back to the alternator. Yesterday afternoon, as a result of a conversation Jan had on Facebook, Tim Casentieri turned up with a brand new alternator for me! I had paid over the phone while Tim had been at Electrostart in Daventry; then he and his wife, Roberta, drove over to see us and help me install it.

Well, Tim actually did the installing; Jan supplied coffee and I passed over various tools as required. Tim preserved the "bolt-on" regulator as per the original setup. When I started the engine my current meter didn't show a big increase in the charging current over what it had been when running on the engine alternator alone. I put that down to the fact that the batteries were already well charged. Time was getting on, so Tim and Roberta left and I continued to think about the Sterling ABC and whether that was helping or hindering. I still don't really know.

There is at least one good thing the Sterling device does, which is to limit the charging voltage to 14.4V to keep the sealed lead-acid batteries happy.

Here is a poor photo of the back of the new alternator, taken after I'd replaced all the deck boards and just before we drove home (oops!) 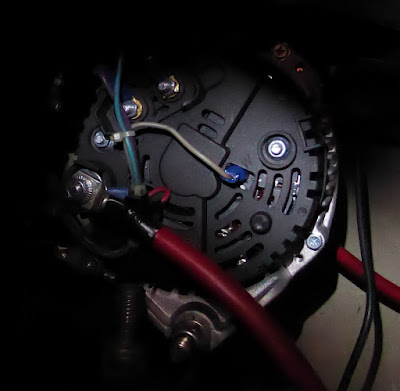 This morning I disconnected the Transpo regulator and started the engine. It seemed to work as before (but the feed to the "L" terminal was taken from the engine battery side of things - not how it should be). As a better test of the alternator's capability I switched on the inverter and plugged in a 800W toaster. I was pleased to hear the engine note drop; when I consulted the current meter I saw it reading about 33A. Good. (The inverter supply doesn't go through the current meter's shunt, so the reading doesn't reflect the power consumed/supplied.)

Then I reconnected the Transpo and performed the same test. Same result. The alternator stayed gratifyingly cool throughout. After lunch I winded Jubilee and we returned to Thrupp Wharf Marina. During the journey I noted that the battery voltage stayed at 14.3V the whole time. I seem to remember that, in the past, the voltage would sometimes be 14.4V and sometimes 13.7V. This, presumably, was when alternators and Sterling ABC were all working properly. Now I am really suspicious of the ABC, but don't know how to test it.

Dave Ward's advice to me is to ditch it altogether, separating the two charging systems (engine alternator/battery and domestic alternator/battery bank). I am inclined to think that might be the best thing to do, but I have some time to consider the options before returning to the boat.
Posted by Halfie at 23:20 9 comments:

Many thanks to all who have commented with suggestions and sympathy (that's how I'm reading yours, Jim!). Dave Ward has gone out of his way to help - thanks Dave.

I have spoken to Ed Shiers of Four Counties Marine Services who would come and fit a new alternator for £360. Dave Ward has found a potential replacement for £182.40. I have contacted West Lancs Auto Electrics who have quoted £145 including delivery, but when I mentioned the external black box thingy they were surprised, saying that the Sterling ABC should look after the regulation. I don't know why an external regulator has been added, as I understood alternators to have internal regulators, as a rule.

Or £182 for a Prestolite equivalent alternator which I could pick up from home ...

Or £145 for a like-for-like Prestolite from West Lancs to be delivered.

I have an idea what I'm going to do, but I'll let you all have your say if you like (and I think I know what you're going to say!)

Here are some more photos, starting with the space where the alternator goes. 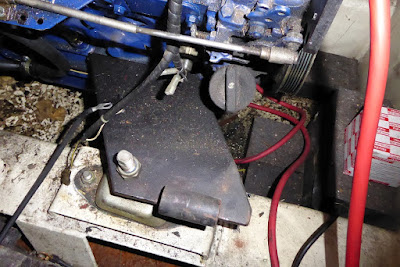 This bolt goes through the mounting holes, securing it to the black cylindrical protrusion from the engine foot. 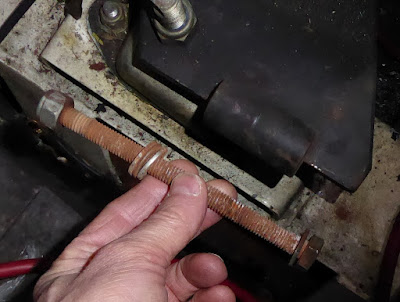 Here is the alternator with its external black box. 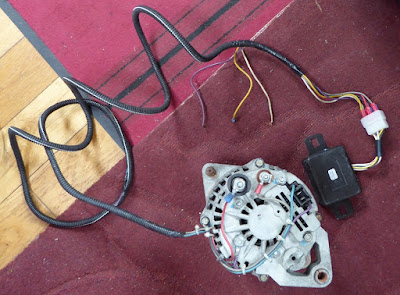 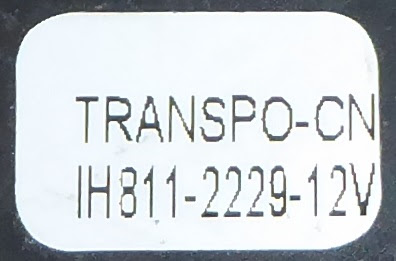 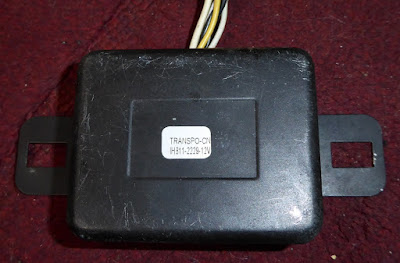 ... and this is the other side of the black box. The wires disappear into a slightly squishy rubbery compound. I will let you know what happens next!
Posted by Halfie at 14:08 6 comments:

Yesterday we brought the boat down to The Galleon in order to be closer to Ally, Ben and Josiah. When I tied up I noticed a strange smell coming from the engine hole - a hot sort of smell, but not hot oil. The domestic alternator felt especially hot; it was also making a new noise. I don't think it has been charging the batteries very well, despite the voltage being between 13.8V and 14.4V when the engine was running. The batteries quickly went down to 12.7V even with no inverter load (inverter switched off). 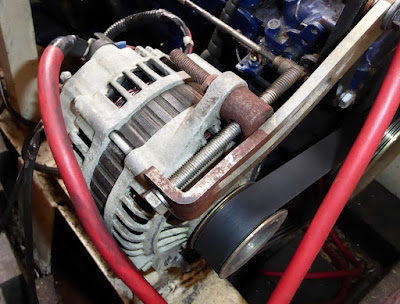 This morning I investigated the digital ammeter I bought from Amazon a short while ago - the display unit is definitely faulty. I checked the voltage across the shunt with my DVM and obtained sensible readings. Incidentally, connecting or disconnecting the inverter negative lead from the battery bank made no difference, so all the charging current is via the shunt; so is all the discharging current apart from the inverter.

I connected my centre-zero moving coil voltmeter across the shunt to allow me to monitor the charging. The scale is marked 10 - 0 - 10 (volts). Full scale deflection would correspond to 114A; with this in mind I was interested to see that, when I fired up the engine again from cold, the charge current measured just 5A. Within seconds the alternator body was almost too hot to touch; the internal fan was blasting out hot air and that strange smell. Cooking enamel insulation?

Other relevant facts: the outputs of the engine and domestic alternators are combined in a Sterling Alternator to Battery Charge Controller stuck to the steel wall of the engine room. When we got to the boat on Sunday the engine room was thick with condensation - all over the engine, the walls and the Sterling ABC. Had this water got inside the device and affected it? When I checked the ABC before switching the engine off after the run yesterday I saw a warning LED glowing, corresponding to "HIGH ALT TEMP, STOP". (There are temperature sensors on each alternator and one of the batteries.) If nothing else, this shows that the temperature sensor on the domestic alternator works, and that the ABC is recognising this. Everything else on the ABC seemed to be working normally.

What I would really like to know is ...
Here are two more views of the alternator. 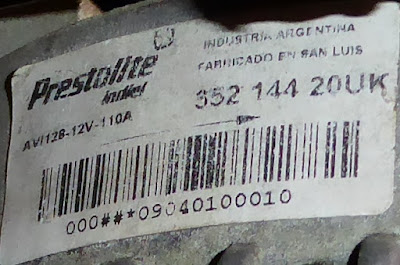 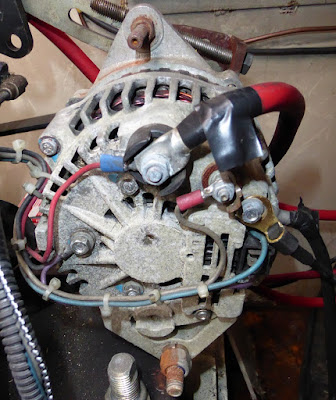 Early this morning our daughter Ally gave birth to a son, Josiah, weighing 6lb 14oz (or 3.13kg if you prefer). We drove over to MK to have a look for ourselves ... and here he is at just ten minutes old! 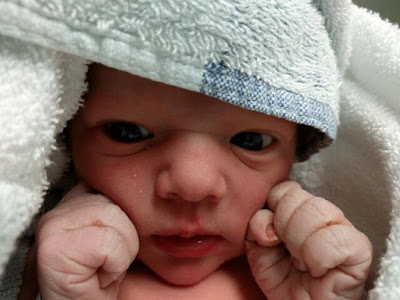 No, we didn't get there that quickly - Ben sent us the photo. Here are a couple I took this afternoon with the very proud parents Ally and Ben. 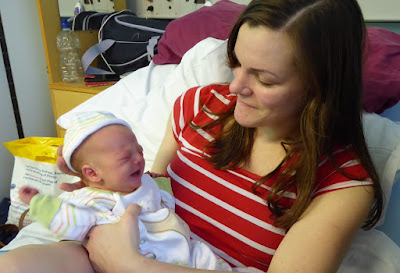 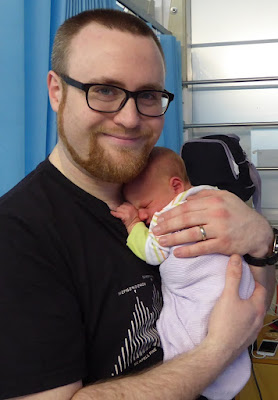 Josiah is our first grandchild, making us proud grandparents (and making me feel quite old!)

I like the canal connection. Josiah Wedgwood was one of the instigators of the Trent and Mersey Canal, which opened in 1777 and greatly benefited his pottery business. (The "original" Josiah was a king of Judah, acceding the throne at the age of eight. "He did what was right in the eyes of the Lord and followed completely the ways of his father David, not turning aside to the right or to the left." (2 Kings 22:2))
Posted by Halfie at 23:03 14 comments:

Ammeter wiring - why doesn't it work?

I promised to show you how I connected my 100A ammeter. Perhaps someone might be able to point out why it doesn't appear to work. Please excuse the scrappy (and dark) nature of this wiring diagram:

The current shunt is in the negative path immediately before the battery bank (four 12V batteries in parallel, not four cells in series!). The actual negative cables attached to the non-battery side of the shunt are one to the engine block "earth" and one to the domestic negative busbar next to the circuit breakers.

The thin wires to the display unit are connected to battery + and either side of the shunt.

On my diagram I added the connections to the inverter as an afterthought. Having done so I am now wondering whether the negative cable to the inverter could actually be earthed there, thus bypassing the shunt.

Whatever, the result of this wiring is that the boat electrics function normally but the current shown on the display unit never exceeds 0.4A, whichever way round I connect the thin wires to the shunt.

As a result of a chance conversation with some banger racing enthusiasts a couple of days ago we managed to get rid of our old Sprite Musketeer caravan. 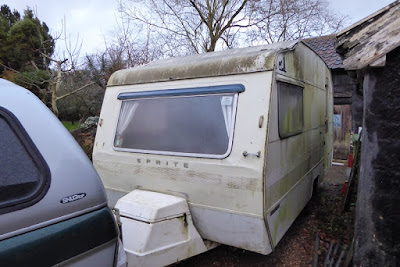 We had lots of holidays in it when the children were smaller and it served us well. It never leaked and always somehow just seemed to work with the absolute minimum of maintenance.

After sitting in the same position by an outbuilding for ten years or so the tyres still held air (after a little pumping up) and the corner braces moved freely. The jockey wheel wound up and down and I was amazed to see that the lights even worked. Usually, just before setting off on a holiday, I would have to do some fiddling with the bulbs in their holders or the pins on the plug. 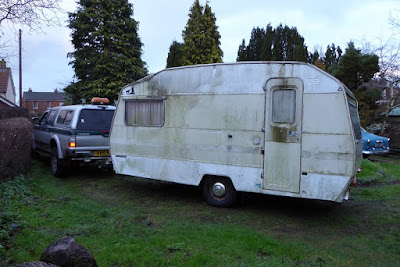 The man who collected it said he might use it as a tea hut instead of destroying it in a banger race. I like that idea.

So farewell, old friend. Happy memories.
Posted by Halfie at 23:20 No comments:

I closed a savings account before Christmas, withdrawing the princely sum of £1.51 to do so. I was surprised to receive a cheque a few days later for the outstanding balance of ... wait for it ... one penny.

It must have cost more than that to print it, let alone post it to me.

I'm pleased, of course, that Santander was determined to pay me every penny it owed me, but could it not have sent me a text message suggesting that I called in to collect my money or it would be donated to charity?

Now, given that it hardly seems worth the effort to pay it in to my bank, what do you suggest I do with the cheque?
Posted by Halfie at 23:04 4 comments: