It's a bit late ... but Happy Easter to you! We went to London to stay with David and Penny for a few days; eleven of us enjoyed a lovely lamb lunch on Easter Sunday. The next day Jan, David and I walked round Greenwich and came across a street sealed off with police tape. A crane had collapsed in the early hours of the morning as a result of the high winds. 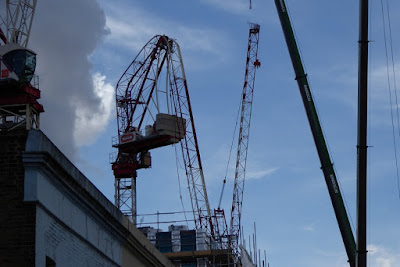 There were a couple of good vantage points to see what was going on. At one point workers were doing something on the platform. 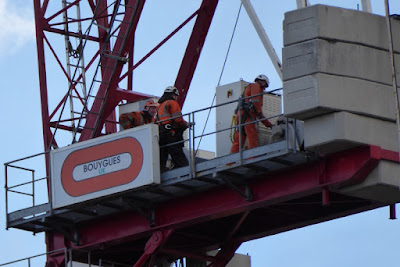 It narrowly missed crashing into a pub. 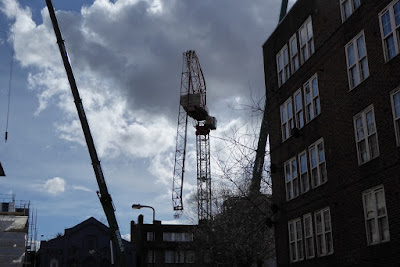 Just yards away was more evidence of the strength of the wind, although the core of this tree was rotten. 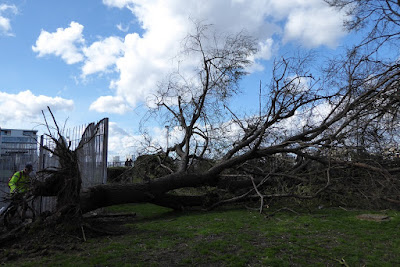 Another few yards took us to the foreshore of the Thames, where David and I did a little light scavenging. 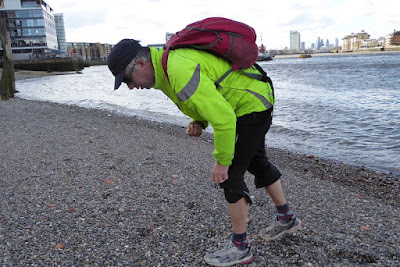 There was the usual collection of clay pipe fragments, with a large amount of animal bone pieces.

We had thought about going on to the boat, but a neighbour e-mailed to say that one of our fence panels had blown down so we decided to go home instead. We'll be boating soon!
Posted by Halfie at 21:21 1 comment:

Cleaning for The Queen (but not sitting down on the job)

Jan and I helped with the regular village litter pick this morning. This time it was under the banner of "Clean for the Queen", a nationwide litter blitz dreamed up, I believe, by Keep Britain Tidy.

First, though, we litter pickers took part in a small-scale unveiling. A bench commemorating the centenary of the First World War - lest we forget - had been newly installed. We ripped off the plastic sheeting and posed for a photo. 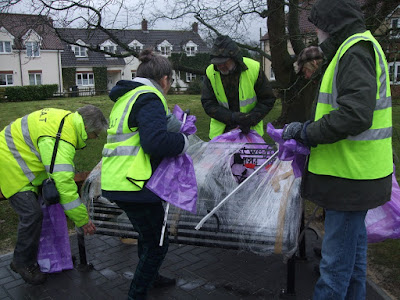 Jan was proud to be the first to sit on the bench, but somehow I missed that photo opportunity. 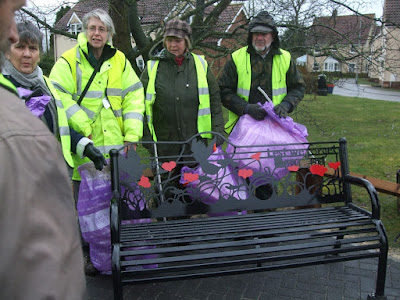 The bench is rather good, with doves of peace and poppies.

Then we dispersed round the village and filled our purple plastic sacks in the rain. Here's Jan posing with hers! 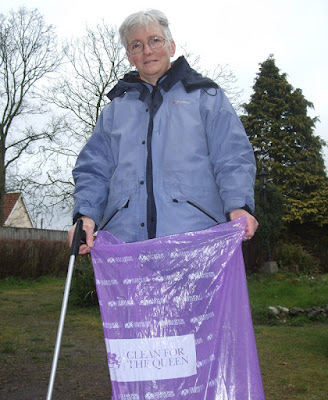 There was more purple this afternoon at a Lenten Concert we went to in Wymondham Abbey. 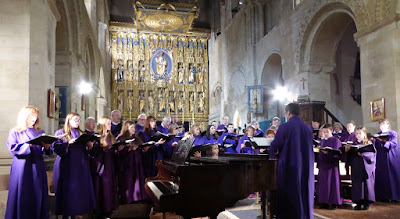 It was very good; we went for a curry afterwards. That was good too.
Posted by Halfie at 22:35 No comments:

In a previous post I have talked about using a centre-zero moving coil meter to indicate the current flowing into or out of the domestic batteries. The meter would need to be mounted on a metal panel which would then have to be let in to some of the boat's woodwork. I'm toying with the idea of using a piece of salvaged old redundant TV equipment - an auto-centering unit for three-tube cameras - which would fit nicely at the top of a cupboard door in the engine room. (Simon will probably be familiar with it.)

I thought I had already published this photo of the meter, but I couldn't see it, so here it is. 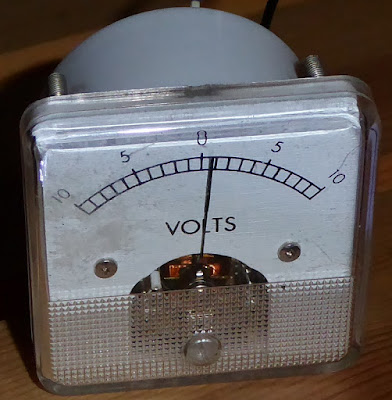 Suitable circuitry will mean that full-scale deflection would correspond to 100A.

The front panel of the ACU will come off, so all I would have to do is cut a roughly rectangular hole in the door to accommodate the backs of the meters and switches, then screw the panel into position.

As well as two analogue meters there are five switches, two indicator lamps and three fuses. The lamp between the meters indicates "on air" - I'm not sure what I could use this to signify!

One of the switches could be used to switch the meter between, say, engine battery volts and domestic battery volts; another could switch between voltage and current. That still leaves plenty of spare switching/indicating capacity.

It seems rather over-the-top, though, and it might look out of place. I am tempted, though.
Posted by Halfie at 10:52 1 comment: