When is a boat with no propeller not a butty?

When it is a paddlewheeler.

I remember seeing this boat on the Grand Union in the Milton Keynes area in the early 1980s. I thought even then, with few lockmiles under my belt, that it was a strange craft. Some years later we got to know the owners who lived in our village near MK. A short while ago I received an e-mail from them saying that advancing years - theirs, not the boat's - were forcing them to downsize.

This is from the broker's website (Virginia Currer Marine):

Savernake is most unusual, being powered by a stern mounted paddlewheel that is driven by a Lister SR2 diesel engine. Originally built by Fernie Boats and fitted by Foxton Boat Services, she has been extensively refitted internally by the current owner. The base plate has been overplated in 2005, together with the bow and stern sides. The vessel has been in the current ownership for 36 years. Originally built with a composite superstructure, this was replaced with conventional steel in 2008. 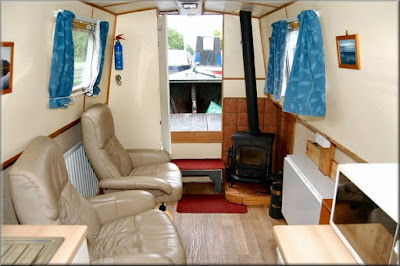 Oh, the downsizing? Our friends have bought a Wilderness Beaver.
Posted by Halfie at 21:35 2 comments: