We moved the boat today to achieve three objectives: to empty the Elsan, to fill up with water and to charge the engine starter battery. Also I think it's a good idea to run the engine every time we visit the boat over the winter period.

This is the view as you come onto the Coventry Canal at Fazeley Junction - Coventry to the right, Fradley to the left. 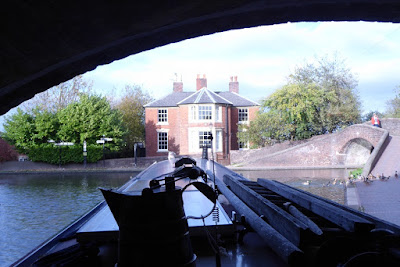 Having winded this is Tolson's Mill on the Birmingham and Fazeley Canal; our mooring is a little further on the right. 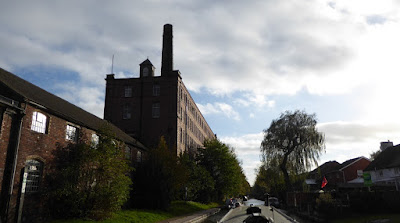 This afternoon we walked into Tamworth for a watch battery. On the way back, as we crossed the point where the rivers Tame and Anker merge, I took this oil painting photo of a heron at sunset. Jan has been putting a lot of work in in preparation for the Boaters' Christian Fellowship AGM which is on Saturday in Rugby. We shall be going by car, not boat.
Posted by Halfie at 21:43 1 comment:

How did I manage without one of these?

A few days ago, after some deliberation, I bought myself a combi drill, which I take to mean a combination drill/screwdriver. At a shade under £50 from Aldi it must be among the cheapest on the market. 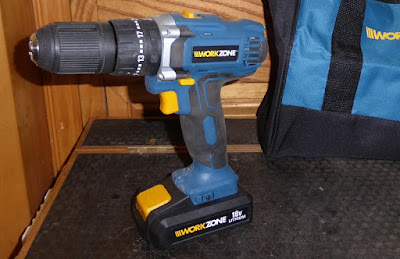 My August Toolstation catalogue lists a similar spec Bauker drill driver a penny cheaper at £49.98; the next comparable tool is double that and still has the same capacity batteries.

Minutes after cycling home with my purchase I was fixing a wood block to the wall of the house; this afternoon I did some more drilling and screwing jobs at Andrew's house in Sheffield. It's so quick and easy! For all these years I have been stringing up extension leads, fiddling with a chuck key, finding the right screwdriver (manual, of course) and so on. Now everything is in one small bag, with no need of mains electricity. The jobs took less than half the time they would have done. I would say "Who knew?" but I expect you all did.

Yes, the batteries may be on the small side, but the sort of jobs I need a drill for are usually small ones themselves. Neither is the motor brushless. Nevertheless I suspect my faithful old Black and Decker may never get powered up again.
Posted by Halfie at 22:57 2 comments:

We came up to the boat yesterday as we had been invited to Andy and Helen's 30th Wedding Anniversary celebration in Aldridge today. We joined more than 50 other guests, including at least four other boaters, for a splendid buffet lunch with a looped slide show of pictures from the happy couple's life over the last three decades showing on a screen above the cake.

And what a cake! An iced Wandering Bark … 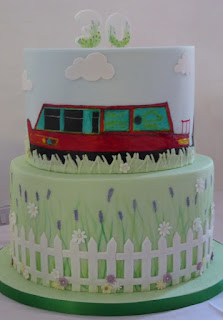 … towing The Jam Butty past a WildSide meadow. 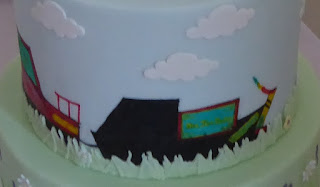 We sat at a table with Adam and Adrian of Briar Rose, Sandra of Areandare and Bones of Bones. It was excellent to see them all, and Andy and Helen, of course. Unfortunately some people didn't make it through the traffic in the London area, including Sue of Indigo Dream.

Andy and Helen, thank you for granting us the privilege of being able to share in your celebrations. 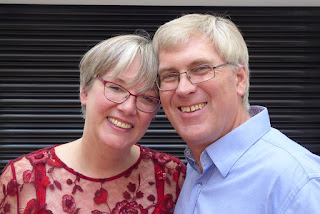 The Aldridge Church Centre was a superb venue for the event; other guests included family (of course), members of the church and their book club friends. 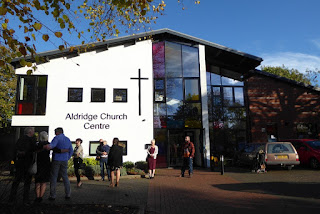 And all less than 12 miles from our boat - very handy. We're back on board tonight and will visit Andrew in Sheffield on Monday.
Posted by Halfie at 20:49 No comments:

Jubilee on the telly

Relaxing in our sitting room at home Jan got a message out of the blue from an old college friend.  "I've just seen you on TV", she said.  Scrabbling for the TV listings we realised it must have been Songs of Praise on BBC1, which had just finished.

We remembered we had encountered a cameraman filming a couple and their boat at Braunston around the time of the historic boat rally in June. The couple - independently of the Boaters' Christian Fellowship - were talking to people they met on the towpath and looking for opportunities to share their faith in Jesus.

Here's a screenshot from the programme featuring us in front of Jubilee talking to one half of the couple. 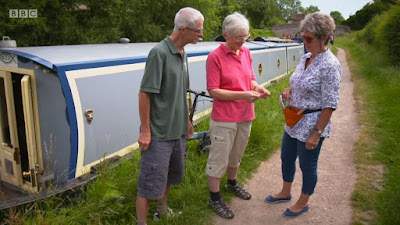 It was a look ahead to next week's programme featuring the couple and their boat, My Diadem. 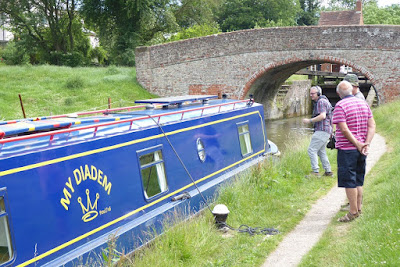 Nick Wolfe (Aldgate) didn't escape my lens; I don't know if he will appear in the film. 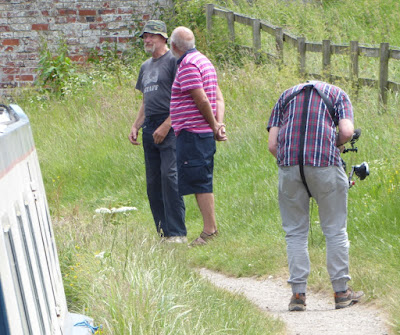 My Diadem was filmed going up Lock 2 ... 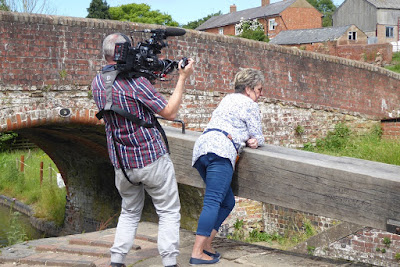 … including footage taken with the camera resting on the balance beam as the gate was closed. 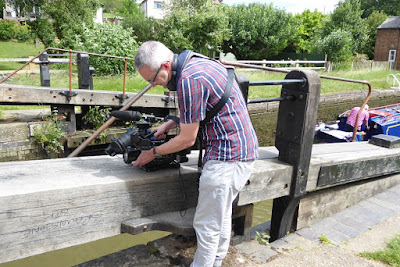 It will be interesting to see if there's any more of us when the programme goes out next Sunday. That's Songs of Praise, BBC1, 21st October at 2.55pm.
Posted by Halfie at 23:14 No comments: