Ammeter update and other small jobs

Hmm. I rewired the shunt this morning hoping to detect charging current flowing into the batteries, but the meter displayed 0.0A. Either the display unit isn't working or there's something else I've missed.

We came up to Jubilee on Sunday; I've done one or two jobs on board and we've been helping at Ally and Ben's house nearby. This evening I finished building a high-level cupboard in baby's room (only three or so weeks to go).

On the boat I wondered why the shower waste pump wouldn't automatically switch off, so I checked the hair filter. This was completely clogged. (I thought I'd cleaned it very recently - apparently not!) Cleaned - now all is well.

When we got back to the boat this evening we couldn't open the internal door from the engine room into the cabin. It has a Yale-type lock; the key just wouldn't move the latch. We were able to enter via the front doors and I took the lock apart. The thing that rotates to withdraw the latch had rotated too far; I managed to put it in its right place. The mechanism now seems to work but I expect it failed because it is worn. I'm expecting it to fail again some time.
Posted by Halfie at 23:59 2 comments:

Attempting to install an ammeter

A few weeks ago I ordered from Amazon a 100A ammeter. We are currently (oops!) on the boat having got here two days ago. Yesterday I had a go at connecting up the current shunt and digital display.

Ideally I would like to be able to see how much current is flowing into or out of the domestic battery bank; I know that these meters need the shunt to be in the negative lead and that they work in one direction only. I have an idea for how to deal with this later, but for now I wanted to see if the device would work.

As soon as I lifted the lid on the battery compartment I realised that things were not going to be straightforward. Some of the negative connections, from the alternators, for instance, I think go directly to the engine "earth". And there was the massive cable going to the inverter. Do I try to put the shunt in the way of this? The inverter is a 3kW jobbie; at full output it could draw at least 3000 / 12 = 250A, so my 100A shunt would get all hot and bothered. Plus the display would merely indicate overcurrent.

I bolted the shunt to a spare short battery lead from the negative of the battery bank and connected all the negative leads apart from the inverter to the other end of the shunt. I say "all" - there were, in fact, just two leads. One was the negative connection to the 12V distribution busbar; the other connected to the engine block. Then I connected the three small leads from the display unit - one to +12V and the others either side of the shunt.

I found the display reading the battery voltage more or less correctly (overreading by 0.2V) and displaying 0.0A. Then I switched on all the lights to see if the reading changed but it didn't. (That's LED lighting for you - I should have switched on the tunnel light!) I guessed I had wired the display for current going in the other direction but I had run out of time to see if it measured a charging current as we had promised Ally and Ben some help at their house.

Today I had another go, swapping round the current sensing wires and connecting only the 12V distribution negative. Mistake! This is how it looks now. 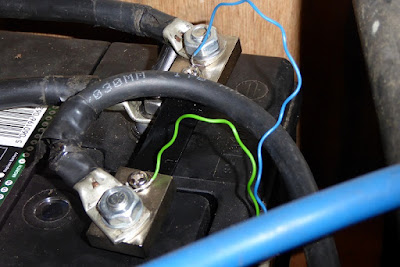 This is the display. The wires coming out of it are only a few centimetres long, hence the different colours at the other end. 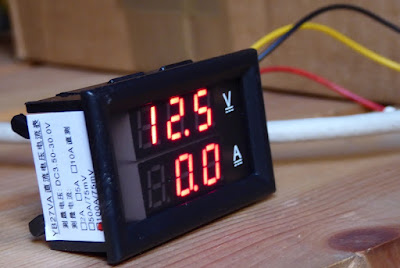 The mistake I made was to not connect the lead to the engine block to the shunt (I had reconnected it to the main battery negative). When I checked the display again it showed 0.2A when the water pump ran, but the reading jumped between 0.2A and 0.4A in an apparently random manner.

Tomorrow I shall have to connect up the engine block lead and see if I can register any charging current.

My solution to the only-reads-one-way problem will be to add a simple changeover switch in the current sensing wires. Then I should be able to see the charging current when the batteries are charging and the load current when not charging.

What is it? - the answer

Kevin T of NB Tranquility got it. It is the breather for the ground paddles on a lock on the Huddersfield Narrow Canal. The pepperpot-shaped device seems to serve as a bollard or strapping post too. 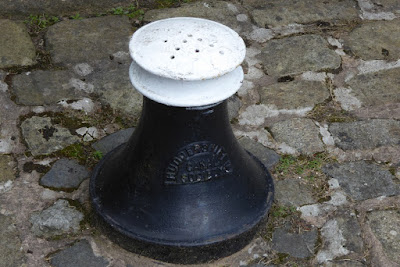 The breather (if that is what it is called) is marked "Huddersfield Canal Society". 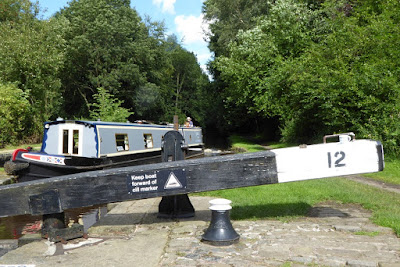 What is it? - more revealed

First, thank you to all who have wished us a Happy Christmas. We went to church at St. John's, Blackheath with David and Penny, their children, my (and David's) parents and Penny's mother. Our other brother, Peter, and Penny's sister, Liz, arrived in time to join us for lunch. This was a jolly affair with 12 of us round the table; we just about finished eating before The Queen at 3 pm.

But you don't want to read about our family Christmas festivities - you want to know what the mystery photo is. Well, here's a bit more: 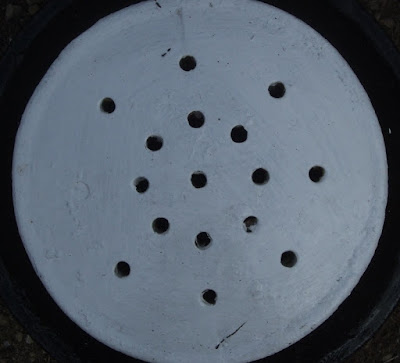 All will be revealed within a day or so.
Posted by Halfie at 08:59 4 comments:

Seen on our cruise this year. 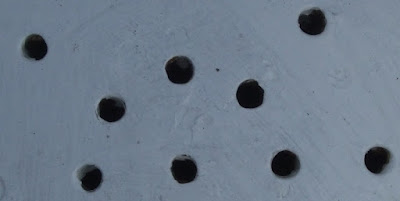 Can you identify it and its location? No prizes!

Depending on how much time I get tomorrow(!) I'll reveal more.

Meanwhile Jan and I wish you a very Happy Christmas!
Posted by Halfie at 17:49 4 comments:

We had a nice e-mail from James and Hazel of nb Gabriel today which mentioned that they were finding that the folk scene where they are in Buckinghamshire is thriving. I don't suppose much of the music they perform in pubs and clubs is as old as the manuscript we saw today. 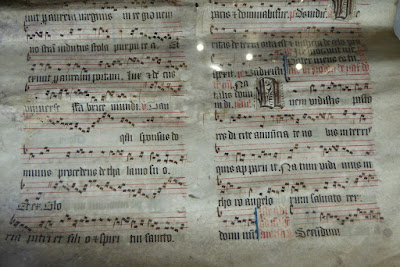 This is a page from a book of antiphons - short songs written for use in church services - dated to the 1400s.

For something produced 600 years ago and, presumably, intended for daily use it looks in remarkably good condition. That's vellum for you, I suppose. (Sad that vellum is no longer to be made in this country.) And non-fade ink.

Some words are recognisable, but others look like a series of ems, ens and so on all running together. 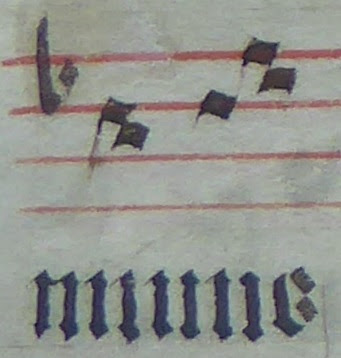 We had gone to Wymondham Abbey near where we live in Norfolk to look at a Christmas tree exhibition and discovered that two extensions had been built since our last visit. In one of these modern additions very high quality displays of artefacts from the abbey were available to casual visitors like us. 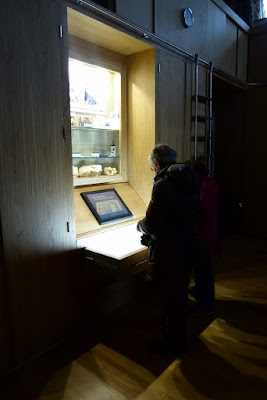 The most striking interior feature of Wymondham Abbey is the fabulous gold screen behind the altar. 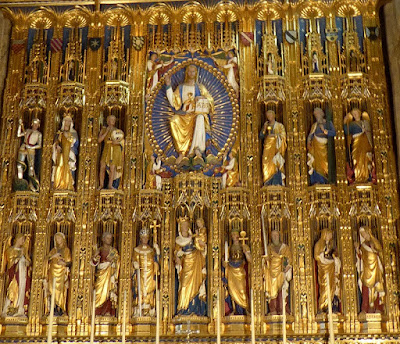 It was installed in the 1920s as a memorial to Wymondham people who had died in the First World War. 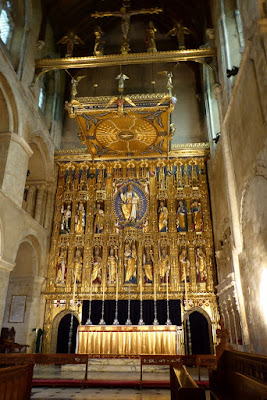 Wymondham Abbey is a landmark for passengers on the train from London to Norwich; when you see its twin towers you know Norwich is ten miles away. 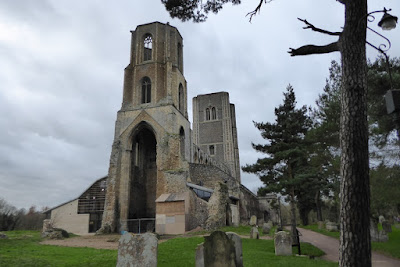 I saw our outside thermometer reading 15C today. As I walked to our carol service yesterday on Sunday I heard the summery sound of lawn mowing.

edited for a small correction
Posted by Halfie at 22:36 1 comment:

As is usual for this time of year a group of us stood outside Tesco's and sang carols for an hour this morning.

Jan kept us in tune with her violin ... while I was plenty warm enough in my shorts, thank you very much. 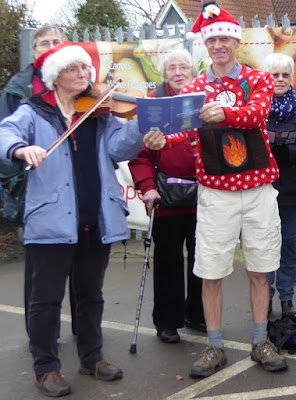 It felt strange singing "In the bleak midwinter" when the temperature was over 14C.
Posted by Halfie at 22:29 1 comment:

I suffered a painful right hand over most of the summer, not that it stopped me winding thousands of paddles. I think the condition had been exacerbated by my using hand shears to cut the large leylandii hedge in our back garden, so today I decided to treat myself to a petrol hedge trimmer. After reading various reviews I settled on the Titan TTL 531 HDC from Screwfix (£89.99).

Initially all went well. I read the instructions, mixed up the two-stroke fuel, put it in and started the machine. It ran for ten minutes and cut the hedge well.

Then it stopped. I oiled the blades and spent the next 20 minutes trying to restart it; eventually it fired up and I was able to do another 20 minutes of hedge trimming. And then it stopped again. This time I gave up after five minutes as it was getting dark.

Tomorrow I'll check the spark plug. If it seems OK but the trimmer still won't run properly I might have to phone the helpline before returning it to Screwfix.
Posted by Halfie at 17:20 No comments:

Mid December and I'm back in shorts again. 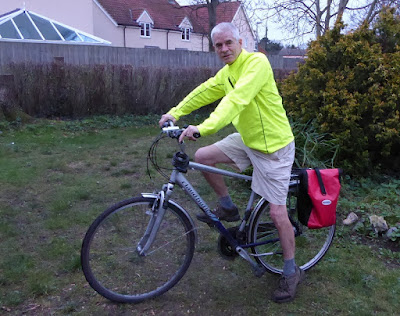 Yes, the mild weather isn't only bringing out the daffodils, as reported elsewhere, but my legs too.

As you can see, I haven't quite forgotten how to blog. I find there's considerable inertia; when I'm in the habit of blogging, as during our long cruise this year, it's fairly easy - but having stopped for a while it became more and more difficult to summon up the will to do it.

Now I've broken my December duck we'll see if I can keep going - or if this is merely a quick single.
Posted by Halfie at 15:58 No comments: