One of the jobs which I'd been saving up for when we were installed at the marina was the multiway connector. This had been giving intermittent problems where either the engine starter wouldn't do anything; or the engine stop button wouldn't do anything; or the rev counter appeared stuck. In these situations physically disturbing the connector made everything work again, so it was evident that there was a faulty connection amongst the 13 wires joined here. 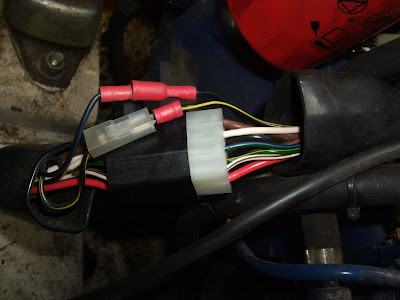 The connector is located on the same side as the injectors, towards the back of the engine and only a few inches from it. In the photo the cables on the right come from the engine, 11 of which end in "spade sockets" housed in a white plastic block. This block receives a matching black plastic block which contains 11 "spades", the ends of the wires going off left to the instrument panel. (Two other wires are separately joined.)

This is what it looks like when the multiway connector is separated: 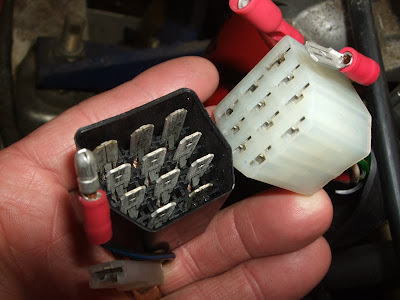 I tried to clean the spades with a small file. Individual spade terminals are fairly easy to remove from the black housing by pushing a screwdiver in to release a small locking tab, but I couldn't work out how to remove the spade sockets. Any ideas? I wanted to crimp the curly gripping parts of the sockets so that they would grip the spades tighter. As it was, I merely pushed the two halves of the connector together again and hoped that it would be all right.

It seemed to work afterwards, but I expect the problem will recur.

If you do know how to release the spade sockets, or if you have any other ideas about this, please leave a comment!
Posted by Halfie at 23:55

This is the kind of stuff that happens with connectors of less-than-ideal metals, when the current passed through them is too low to undo the oxidation. Smaller connectors would have been better from an electric point of view, although mechanically these are better... "Gold" contacts would help of course.
I would use "contact cleaner" from a spray can. That would remove the oxidation from both sides and, depending on the type, protect you for some time. Available from electronics shops or, sometimes sold as protector against humidity in contacts, from car repair shops.

Same principal as the male connectors, insert a very small screwdriver in the 'notches' in the white connector.

Ideally replace all the female terminals as they get brittle. Parts from http://www.autoelectricsupplies.co.uk/product/825/category/2 for example but you will need the proper crimping tool.

When they discussed this over on CWDF the other week, Bizzard pointed out that the whole thing is just a convenience for the engine installer. What he does when it starts giving trouble is to remake each of the connections outside the block, covering them with heat shrink.

A bit more trouble than nursing the block, but a permanent solution. Just make sure you only do one connection at a time!

Frank, Chris and Bruce, many thanks for your helpful suggestions. Given that I'm not anticipating having to remove the engine very often, I think that remaking the connections by soldering each one in turn and using heatshrink will be the best long-term option. Before then, if Ally and Ben have problems, I'll get them to dose it in contact cleaner. (And the multiway connector!)