Millennium Mills and a boat on a boat

Down at ExCeL for the table tennis on Saturday, we ate our sandwiches right by the side of Royal Victoria Dock. Facing us was the Millennium Mills building, named after a best-selling brand of flour in the nineteenth century. The mill was built in 1905; partially destroyed in 1917 by an explosion at a wartime munitions factory a hundred yards away; and rebuilt in 1933. 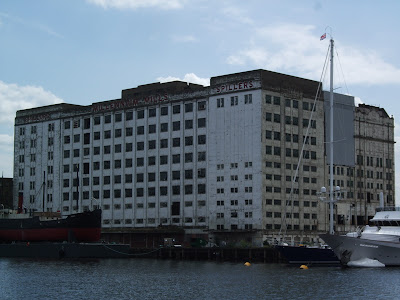 Moored in front of the old mill was what looked like a floating pontoon with a sea-going ship on top. 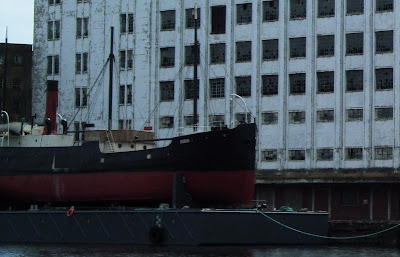 Is this some sort of dry dock device? I can imagine the pontoon being flooded to allow the piggyback boat to float off.

In front of the main entrance to ExCeL was a sculpture evoking the age when the docks were busy with manual labour. 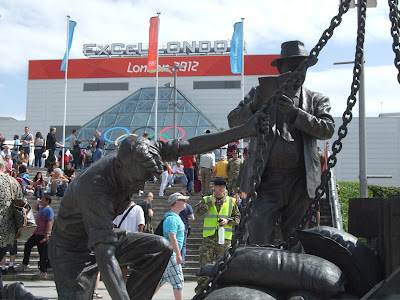 My father-in-law was describing to me yesterday his former life as a worker at this very dock. He worked for Imperial Tobacco involved with the weighing of casks of tobacco and making sure that Revenue and Customs got the right amount of duty. 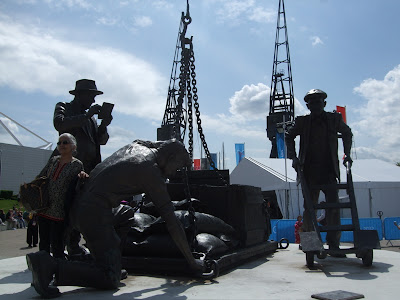 In the background of the above photo are two of the original dockside cranes.
Posted by Halfie at 22:45

The ship on the pontoon is SS Robin - http://www.ssrobin.com/ - a restoration project that's unlikely ever to be floated off its 'dock'..

We have to thank "Ditchcrawler" from CWF, who sent us the information when we posted a photo of the ship on our blog in January!

Thanks Sue - I did wonder if Robin's large funnel was indicative of its being a steam ship, now I know.