Halfie at the Olympics

We can't match Richard and Sue's opening ceremony experience (by the way, did you spot the Regents Canal Bridge 47 in the countdown sequence at the beginning?), but we did go to an actual Olympic event yesterday, on day one of the Games (not counting the footy which somehow seemed to get going before the Games had even begun).

The only tickets we managed to get were those for a session of table tennis at ExCel by the side of Royal Victoria Dock in London. Our first glimpse of an Olympic venue with the Games under way, though, was at Stratford, where we changed trains from the national rail network to the Docklands Light Railway. 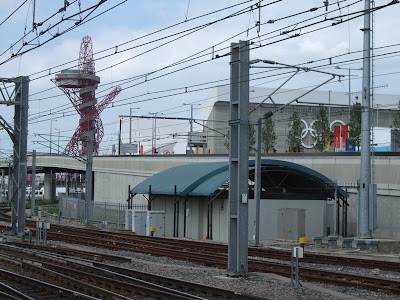 After a short driverless train journey to West Silvertown we walked towards the venue, seeing it first across the empty expanse of Royal Victoria Dock... 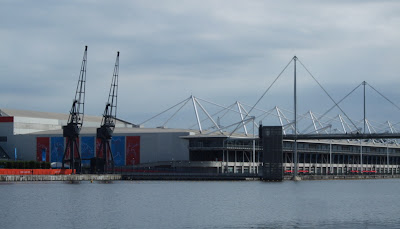 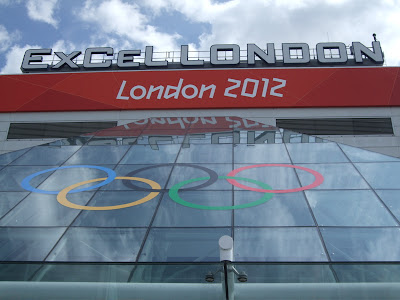 Now, I would have to admit that I wouldn't count table tennis as one of my top sports. Yes, I've knocked around a few ping pong balls in the past, but hasn't everyone? So I was thinking that seeing it played at Olympic level would be difficult to follow, what with the speed of play and our distance from the action (we had the cheapest (£20) seats). I was expecting to come away with nothing more than being able to say "I was there".

In the event, though, our seats, despite being in the back row but one, afforded a really good high view of the four table tennis tables side on. At first, the tables seemed very small, but, once play started, it was easy to follow the action. I had taken binoculars, which were useful for checking the scores, but it was better to watch the players without them. 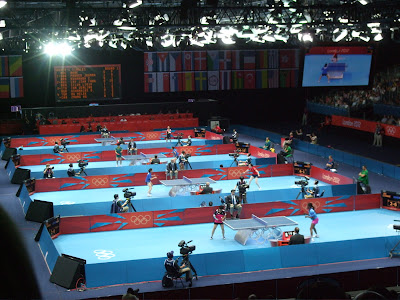 Before things started we didn't know which players we would be seeing, and it was good that we had two Brits to support. First up was Joanna Parker in the Women's Singles Round 1, in action on the second table from the camera in the photo above. She's the one on the right, in red, with an opponent from Brazil, Caroline Kumahara.

The crowd cheered and clapped just about every point Parker won, willing her to succeed. And succeed she did, taking a victory walk around the arena to a standing ovation. I don't know how the players on the other three tables managed to concentrate.

Later in the session Parker's teammate (and boyfriend) Paul Drinkhall faced a Kuwaiti in the Men's Singles. Again, the Brit was cheered to victory.

A fantastic Olympic experience for us, then. We're very glad we made the effort. Oh - well done the the Table Tennis players, too. And the organisers: it was brilliantly done. Smooth and efficient. Our only queue of the day was because we turned up at the event ten minutes too soon.
Posted by Halfie at 22:45