One of the most interesting boaters I have met is Edwin Fasham. I have written about him before, when he showed his model of his boat, and when he gave an account of his repairing an enormous diesel engine in a ship (he virtually had to cut a hole in the side and climb in, as I remember. You can check if I got that right by checking my blog post here.)

Edwin Fasham was a fellow attendee at the BCF weekend in Staffs, and came in his boat. 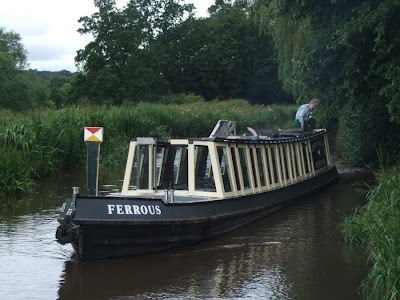 When I say "his" boat, I mean that in both the sense that he owns it, and also that he built it. And when I say "built", I don't just mean that he fitted it out (no, that is still a work in progress). Edwin is a man who makes things out of metal. In his home forge, yes, really, he cast the aluminium window frames making up a large part of the sides of the boat. He fabricated the stainless steel decks and cast the aluminium/bronze treads. 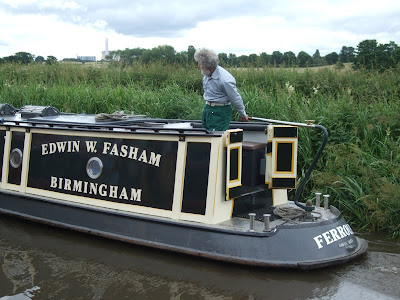 He cast the anvil tiller pin. 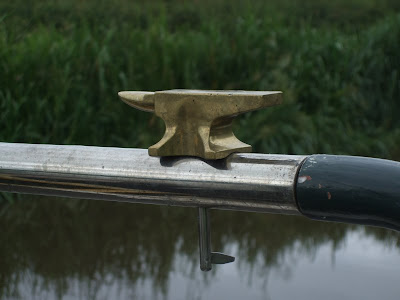 Anvils feature heavily thoughout the boat, being cast as design features. The engine is a magnificent Gardner 3LW which sits in gleaming silvery splendour in the middle of the boat. When it's running it doesn't draw undue attention to itself, purring smoothly and quietly in the background. The power is there when required, though.

There are many features of this splendid boat which could be written about, from the modified diesel range to the hinged steel bunk bed to the cast aluminium LED lights, but, unfortunately, I didn't have my camera on me when I was being shown round. Next time!

The name of the boat, Ferrous, says it all, really.
Posted by Halfie at 22:00