Phew! Made it to Braunston

We set off from just above Lock 29, four from the bottom of the Hatton flight, after breakfast. 29 locks and 20 miles later we arrived in Braunston as the light was fading rapidly. After Leamington Spa a Viking Afloat hire boat with eight Finns came up behind us, and we shared all the remaining locks.

We witnessed a beautiful sunset as we came along the stretch between Napton Junction and Braunston - this is the best of my photos. 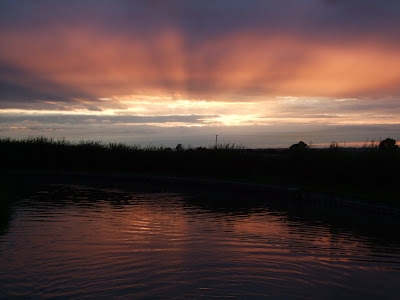 Soon after turning right at Braunston Turn we passed No Direction. I waved to Jayne, but she probably couldn't see who the man in the hat was as it was definitely getting rather dark by then. We found half a space before the water point by the toll cottage, so we tied up. We'll leave early in the morning so we shouldn't inconvenience anybody. That means we probably won't have time to say a proper "hello" to Ray and Jayne - sorry!

After tying up we went to the "two for one" pub - can't remember its name. I had a very nice pint of Marston's Old Empire. Tomorrow's destination is Stoke Bruerne, then MK on Monday.
Posted by Halfie at 23:59

Never mind Halfie, will catch you next time.

You'll be a day too late to catch me. I've been on board for a couple of days, but my night shifts start tonight. Look out for Briar Rose as you go past Thrupp Wharf on Monday - berth no 15.

Diesel tends to be quite expensive at MK marina, so it might be worth filling up at Baxter's at Kingfisher marina as you go past. it was 85p base when I got some there a couple of weeks ago.

Adam, I spotted your boat as we went past. Unfortunately we were too early for Baxter's as they don't open until 1100 on Mondays. We coud have waited, but Ally and Ben were keen to get to the marina. They'll have to fill up at their 99p rate!

Oh, and Ian, thanks.