Our last boating on Jubilee for a while

After a very busy week at work - it's all right, I won't mention the T-word - I'm pleased to say that I'm now on holiday. Hooray! Yes, I know I've had quite a lot of time off recently: I've been using up some long service leave working on the Birmingham house.

Our holiday will start with a Boaters' Christian Fellowship barbecue on the bank of the T&M just north of Rugeley; then we're off to Brum for Ben's graduation. After that will come what is likely to be our last cruise on Jubilee for a while as we help Ally and Ben move their home down to Milton Keynes and get established in the marina there. 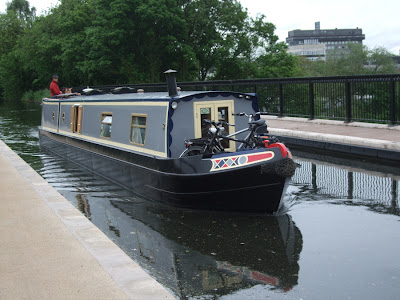 We're expecting to be leaving Birmingham on Thursday morning and get to MK Marina on Monday afternoon, going via the north Stratford and the Grand Union. If you spot an un-signwritten boat as in the photo above, do say hello.

After we leave Ally and Ben in their new surroundings I don't know what we'll do for the next few days. It's likely to include going up to Sheffield to visit Andrew and Bekka; it might include some walking...
Posted by Halfie at 23:59