The move to Milton Keynes is now under way

Ally and Ben are moving house. After living aboard in Birmingham for a couple of weeks they're moving to Milton Keynes. But, unlike usual house moves, they're taking their house with them. All right, it isn't a house, it's narrowboat Jubilee.

The timing was dictated by Ben's graduation ceremony which was held in Birmingham Town Hall on Wednesday morning. Unfortunately I couldn't get a ticket, so I waited outside. 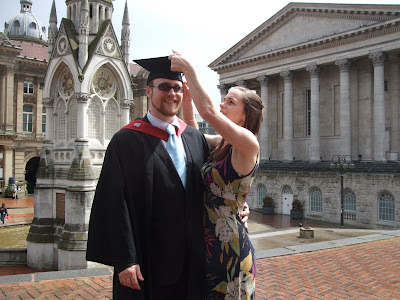 The next day, Thursday, saw BW transform into CRT, after which it was time for Ben and Ally finally to leave Birmingham. 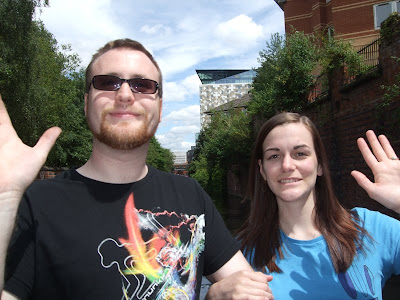 We stopped at King's Norton to do a bit of car shuffling. Our car was there, and A+B's was parked just off Broad Street, so I drove Ben there to pck it up. The return journey was horrendous: four miles took about an hour of crawling traffic. Ironically that's not much faster than a narrowboat. We've bought train tickets to get from MK to King's Norton to pick up both cars (advance fares of just £5 each - not bad). After all that we stopped again at Bridge 5 on the Stratford Canal to get a takeaway from our favourite curry house, the Sweet Chillies, and then tied up at Dickens Heath where we entertained one of Ally and Ben's deaf friends on board for a while.

This morning, Friday, we set off in rain. By the time we'd done a few of the Lapworth locks the rain had stopped, and we enjoyed a pleasant cruise. At Kingswood Junction we joined the Grand Union, and decided to make the most of the decent weather and get the Hatton flight under our belts. 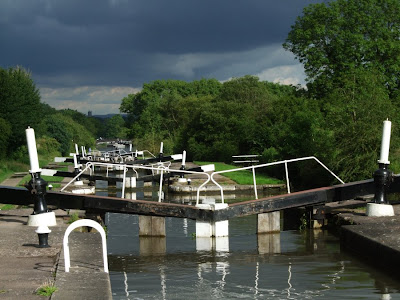 A black cloud hovered overhead, though, and we did have a little more rain, but it was hardly worth getting our waterproofs on. Ally was inside cooking tea, and we tied up to eat with just four more locks of the flight remaining. They can wait until the morning. 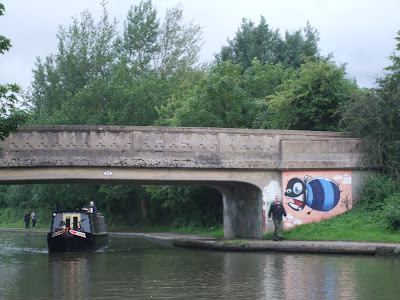 Ben was unaware that he was about to be nibbled by an an enormous angry bee!
Posted by Halfie at 23:59

All the best to them - how I wish I'd known about narrowboats when I graduated - I might never have bought a house at all!!