Tour of Britain flashes past

It's not often that a cycle race passes nearby, but yesterday the Tour of Britain whizzed through Wymondham. Ben and Ally are visiting us this weekend, so, as we wanted to buy some spark plugs, Ben and I cycled to the town to combine the spark plug buying with the race spectating.

There was a good atmosphere, despite some rain, as people lined the streets to cheer the cyclists on their way. The funniest moment was when, about 15 minutes before the official cyclists came through, a postman in uniform pedalled his bike furiously along the route. Everyone cheered loudly, the postie waving to the crowds. (No photo, sorry.) 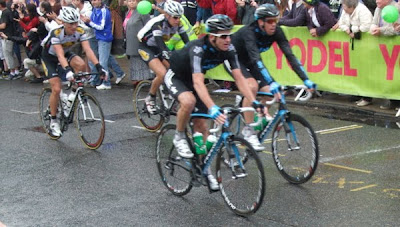 Then someone in a race commentary car with loud hailers made the classic faux pas of pronouncing "Wymondham" with three syllables (this being Norfolk, it's actually pronounced "Windham"). More cheers and laughter. Six cyclists came through about seven minutes ahead of the rest of them, all bunched into a pack. Interspersed were dozens of support vehicles, many with extra bicycles on top. There seemed to be a limitless supply of police motorbikes too. 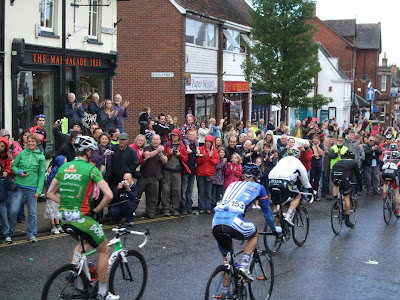 It's all over (for the spectators) very quickly. The participants rattle through, disappear round a bend, and that's it. They were about half way on their 200km stage from Bury St. Edmunds to Sandringham; we just cycled home. We didn't buy the spark plugs - the motorist centre wanted £19.96 for four! I bought them from a Wilco branch in Norwich later for £9.60. And, no, the Wymondham ones weren't platinum plated. What a rip off!

Back to boaty stuff tomorrow.
Posted by Halfie at 16:00

I like the 'postie' story! A postman with a sense of humour :)