There's a good variety of bridges crossing the Old New Main Line of the Birmingham Canal. I've already highlighted the motorway and the Stewart Aqueduct. Here are the next bridges going east. Unfortunately Nicholson doesn't name them all. Is it possible that some bridges never had a name or number?

First, a slender masonry bridge in unkempt condition, with trees and other greenery sprouting from it. If these are not dealt with soon they will cause cracks and speed the bridge's decline. 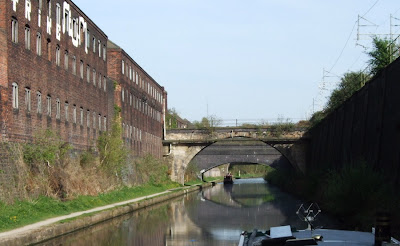 Behind that one is a heavy brick bridge, lumbering its way across the canal. Again, the shrubbery is taking a hold; and the fine iron railings are deteriorating. 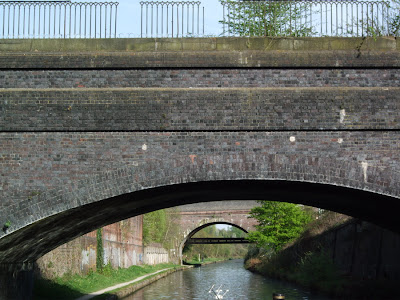 Next comes what appears to be a straightforward brick bridge, albeit with a couple of pipes running through the arch, but look at the other side. 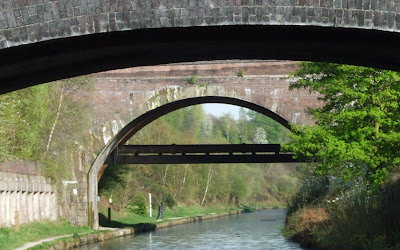 A more modern concrete bridge has been put up alongside the original so as to widen the road above (the A4031 according to Nicholson). This has been done sympathetically, with the new arch exactly matching the line of the old. 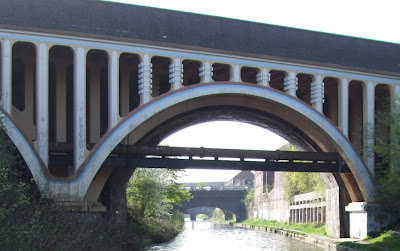 What look like cooling fins on some of the vertical pillars seem to be tie rods and plates for strengthening.

I'll write about my recent trip from Evesham to Wigram's Turn soon, I promise!

edited to correct name of canal: it's the New Main Line!
Posted by Halfie at 09:00

Halfie
As you are asking, that graceful one is Hartley Bridge followed by the blocky Factory Bridges with the ailing Spon Lane bridge coming up the rear.
I dont know all this off the top of my head - I have bought a copy of the IWA's 1980's "Blue Book" (BCN Cruising and Walking Guide)which names every bridge and side arm. I will do a post about it when I get an opportunity.
Andy

Thanks, Cap'n. I look forward to it.