One of the problems with trying to write up a trip several months later is that I forget some - OK, most - of the details. Photographs are, of course, very handy as memory joggers, especially as they are dated and timed. 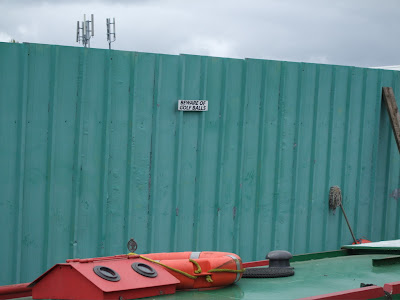 Now I knew that we'd come down the Stratford Canal on 11th April 2011 as I'd written it in the cruising log, but I'd forgotten about the sign saying "Beware of golf balls". The photograph times it at 1318, and, as we tied up at Bridge 5 a few minutes later, I can be confident in saying that the sign refers to the adjacent Cocks Moors Woods Golf Club. But on which side of the canal is the metal fence? I think it might be on the side opposite the golf course, but now I can't be sure.

Quite how you're supposed to "beware of golf balls" I don't know. I imagine that a flying golf ball coming your way isn't going to avoid hitting you just because you're "bewaring" it.
Posted by Halfie at 17:01