Arriving in Stratford (the Avon one, not east London)

As we boarded Shadow after looking round Welford-on-Avon nb Tibet went by, with an out-of-place-looking gazebo in the hold.

Some of the weirs on the Avon are rather beautiful. This is possibly at Luddington or Stan Glover Lock. Near here we picked up Ally and Ben from a fishing platform. They'd parked in Luddington near the racecourse and found their way to the river. 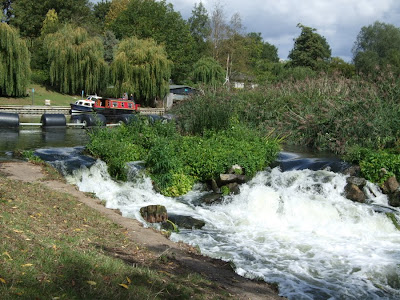 The scattering of gongoozlers at Colin P. Witter Lock, on the approach to Stratford-on-Avon, was a foretaste of things to come. 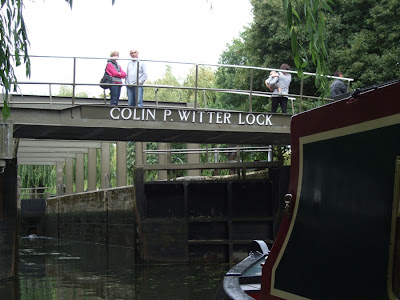 Leaving the river and entering the Stratford Canal was a process observed by a few more gongoozlers - although I have seen this bridge busier. 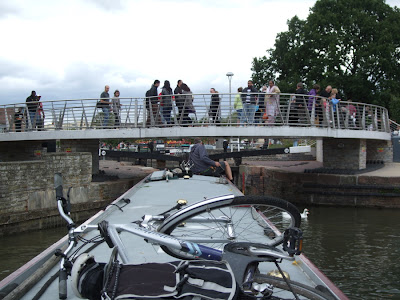 As we ascended the lock a boat very conveniently left one of the finger pontoon moorings in Bancroft Basin, so Fergus executed a neat reverse in and we tied up. Perfect! 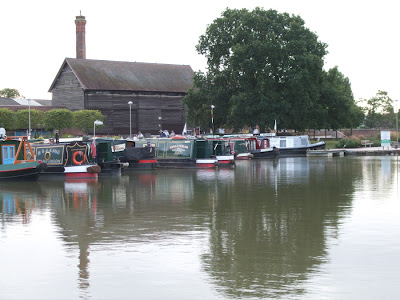 Shadow is the third boat from the right (photo taken the next morning).
Posted by Halfie at 10:00