I think perhaps they don't want you to walk under Bridge 70 of the Stratford Canal, the one crossing the southernmost point of the canal where it joins the River Avon in the town which gives its name to the canal. 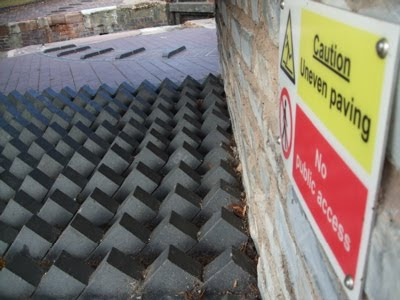 Despite the restricted headroom David checked out the uneven paving. 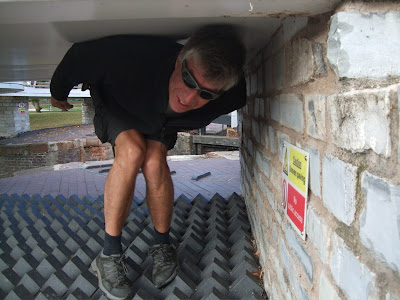 There are few tourists about at 0845, even on a bank holiday Monday. Stratford, like many towns in Warwickshire, has a plentiful supply of olde worlde black-and-white timber buildings. On our way up the canal we stopped at Wilmcote to walk past "Mary Arden's House" and to look at the village and church. Somehow I seem to have taken no photos! The church was interesting. The interior walls are covered in zinc plates with designs painted on them. Nicholson barely mentions the building. We bought ice creams from the village shop. My Feast had partially melted and refrozen, so I upgraded to a Magnum (for no extra charge).

One reason I was taking few photos was that I have yet to write up the part of our April cruise when we came here. I couldn't resist one on the Edstone Aqueduct, though. Fergus, Penny and Jan walk along the towpath after popping down the steps to see Shadow in the air. 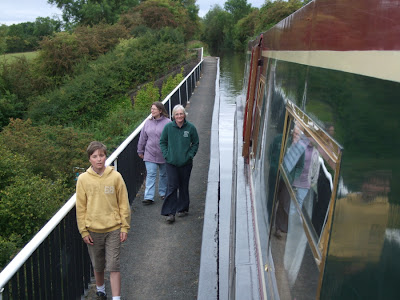 We tied up at Wooton Wawen and walked/cycled into the village. Another fascinating church with Saxon origins (and with an excellent modern oak-built loo block outside).

Near the canal I saw the most impressive wood pile yet. 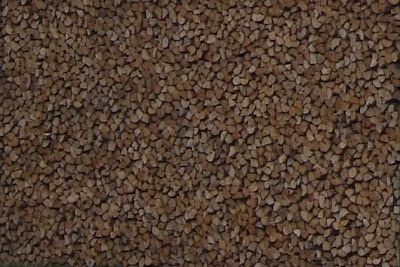 A huge modern barn apparently chock full of logs. I presume they're seasoning ready for sale. Just down the road was a farm shop selling logs from a slightly smaller log store. 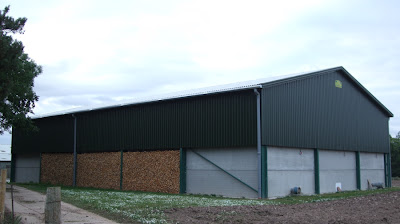 That night we ate in the Navigation Inn by the Anglo-Welsh base. Good food again (we ate well here in April).
Posted by Halfie at 10:00

Walking under that bridge, it just had to be done.