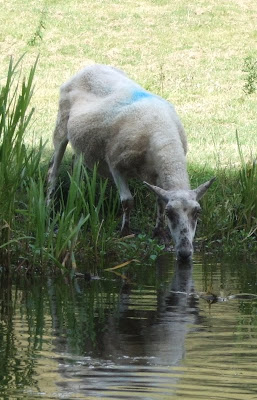 No particular reason for posting this now, but I was scanning some photos from the summer and came across this one of a sheep doing what you often see cattle doing, that is, having a drink from the canal. This was on the Montgomery Canal between Welshpool and Buttington Wharf while we were waking the towpath in July.

**********************
I cycled home from work through the fog yesterday evening. It was actually quite an enjoyable experience. The moon was almost full so the trees and hedges were a ghostly grey, emerging from the surroundings as I cycled along my country route home. With fog there is no wind, of course, and that makes cycling much easier. When I got in I found I was much wetter than I felt, if that makes sense.

This afternoon we rehearsed for our for choir concert next week. We're doing Adiemus by Karl Jenkins; his Armed Man mass; Byrd's Mass for Four Voices; Parry's My Soul There Is a Country; Bainton's And I Saw a New Heaven; a setting of Ave Maria by our conductor, Neil Ricketts; Elgar's The Shower; and an arrangement of Over the Rainbow. We found it much easier singing in the church than in our usual rehearsal venue, a school drama room, so we're hoping we can go there more often.
Posted by Halfie at 23:00