The future of the waterways - Waterways World's webchat 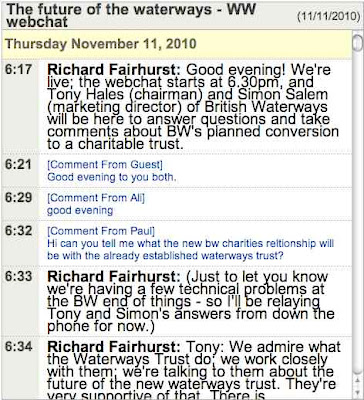 I found myself at a computer at half-past-six this evening, and looked up the webchat hosted by Waterways World on their website home page. From Andrew Denny's comments on Granny Buttons I was expecting to have to go through a complicated registration procedure, but it was all very simple.

Kick-off is officially 6.30pm, but you might like to come on a few minutes early to do any registering, tweaking, adjusting your trousers, etc.

No registration required, nor rearrangement of any article of clothing. Just enter words in a box, give yourself a name, and press the "send" button.

Being there at the beginning I thought if I fired off a question it would stand a good chance of getting on. I put in a fairly naff question about a possible extra source of funding (although the theme was revisited later in the debate) to which Simon Salem, British Waterways's Marketing Director replied. Well, sort of. 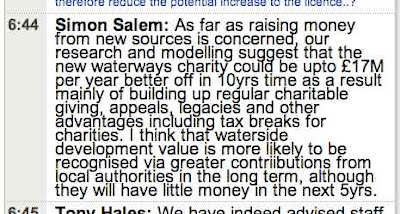 I had to leave the online debate shortly after this, and read through the archived chat later, from where I grabbed these screen images.

Other bloggers who asked questions were Andrew Denny (of course) and Captain Ahab. There may have been others.

The webchat, moderated by WW's editor Richard Fairhurst and featuring BW's chairman Tony Hales as well as the aforementioned Simon Salem, was live for one and a half hours, and judged itself to be a success.
Posted by Halfie at 23:17