Dancing in the aisles to "The Beatles" 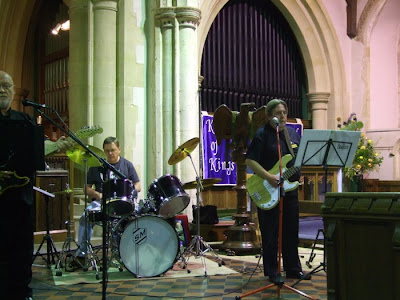 Well, not THE Beatles, of course. That would be rather difficult. This was the Fab Five playing the Fab Four. Ol' Buddies Billy T, Bob, Stik, Chip and Jango filled the church with A Hard Day's Night, She Loves You, Eleanor Rigby, Hey Jude, Nowhere Man and many other classic Lennon and McCartney songs. 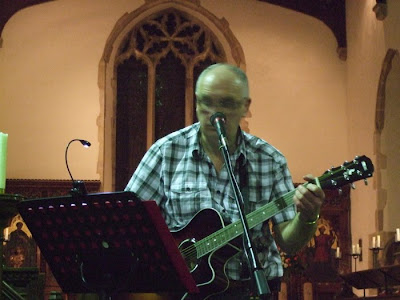 Twist and Shout got 'em dancing in at least one aisle and in the nave. 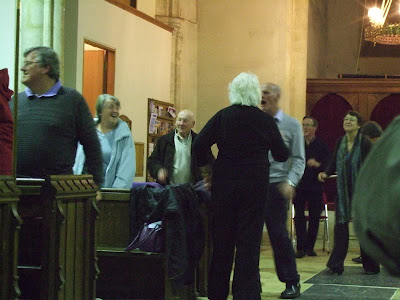 In the interval there were Beatles cakes. 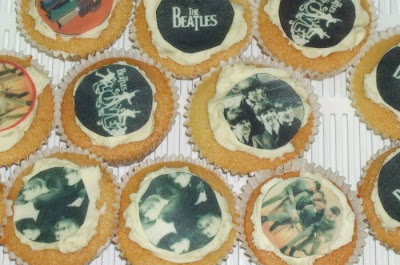 The advance publicity said, rather too self-effacingly, "This event is not for the music connoisseurs" (!) But we all enjoyed singing along with the band.

The first pop song I was aware of was She Loves You in 1965. I was seven. I only really started to listen to pop music when I was 11 or 12, when we used to gather round an illicit radio in the formroom on Tuesday lunchtimes to listen to the charts on Radio 1. And what do I remember? The Bannerman, Tie a Yellow Ribbon, Gypsies, Tramps and Thieves ... and that Labi Siffri song, what was it? (Difficult trying to dredge that up with Vaughan Williams on the radio - yes, these days it's more likely to be R3 or R4!) No. Can't think of it. Whether or not it was the influence of She Loves You, I've always been much more of a Beatles person than a Rolling Stones one. I remember when I discovered the early Beatles numbers in my early teens being very moved by the sentiments in the lyrics.

One other early song memory: Elton John's Rocket Man in JRB.
Posted by Halfie at 22:23

Just been catching up here, Halfie. This sounds as if it was a lot of fun. Was it part of a service?

VallyP, Yes, it was fun, no, it wasn't part of a service!

Sounds like fun - not really a Hard Days Night.
Oddly, my passion for the Beatles has waned over the years and I rarely play their stuff (but the entire back catalogue is on my ipod)but by contrast my copy of the Rolling Stones Forty Licks is up near the top of my frequent play list.
As for Elton John - Candle in the Wind was used as an example of modern poetry by a very progressive english teacher at North Walsham Secondary and has been an enduring favourite.

I sent you an e-mail a couple of weeks ago, Andy - did you get it?