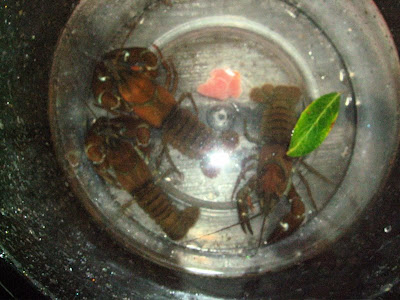 Back in August, when we returned in darkness from eating at The Old Barge, we found that "our" landing stage was occupied by three or four teenagers dangling string into the water. My first thought was that they were crabbing, but they explained that they were catching crayfish. The bait was the same as that commonly used by crabbers: a lump of bacon. They were happy for me to photograph the crayfish they'd caught, but I felt I'd have been pushing my luck had I pointed my camera at their faces! 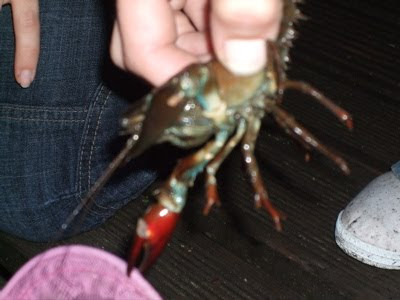 I rather rushed these photos, hence the poor exposure and focus! The crayfish were, of course, the invasive American signal crayfish, which have all but wiped out the native species.
Posted by Halfie at 22:45

Ayeee! as the Cajuns say in Louisiana--time for Crayfish Etouffee. Below is a link to a great recipe.
http://www.nolacuisine.com/2006/12/28/shrimp-etouffee-recipe/
:) Jaqueline
Pullman WA USA

Loads of crayfish on the GU too, especially in the Chiltern section.
I hear now that the re- emergence of otters in some areas might help as they are partial to crayfish. There are otters up at Amwell on the Lea.

If you always write interesting, I will be your regular reader. skin care