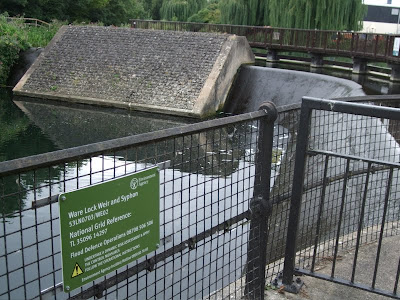 In a comment on yesterday's post where I mentioned Ware, my attention was drawn to Ware Weir. Martin asks if I was impressed by its location. I didn't understand what he was getting at, so I did a quick internet search, and found a website with a feast of historical information on the Lee and Stort. It's at www.leeandstort.co.uk. The page I landed on was that on Ware Weir. Richard Thomas has collated information from the National Archive, the London Metropolitan Archives, and a box of Lee Conservancy staff record cards. There's also information from census records. The entries under "Ware Weir Cottage" are fascinating. Here are a few to whet the appetite (it's arranged with the latest dates at the top, so read from the bottom up).


17.4.1920  Letter received from Ware UDC asking if the Board have any objection to the weir keeper at Ware Weir acting as steamroller driver occasionally.  Resolved that “Weir keeper Phillips be allowed to act…as steamroller driver, provided his work…is not interfered with…and that he does not wear the Board’s uniform during the performance of his work for the Council” (NA Rail 845/47)
The records start in about 1761 and chart details of who looked after Ware Weir up until 1947. The entry dated 22nd April 1881 shows that the job wasn't without its dangers.

The successor to the unfortunate John Wells, Thomas Rock, is appointed at age 44. In 1914 Mr. Rock is 72, and attracts the following comment: "He is very old for the job, but I think he might be allowed to remain for a time."

He died just two years later, just after being taken with his wife to the infirmary.

There's lots more where this came from, including the sacking of a Mr. W. Gold in 1934. He had "left the sluices open all night and drained the river above to a foot below bottom level, stranding barges and wasting an “enormous volume” of water ..." Well worth a look.

Oh, and I still don't know the significance of where Ware weir was. (Or is.)
Posted by Halfie at 23:59

Spooky. Late last night I was thinking about blogging a piece on the differences between EA locks and BW locks (I still may do), so I googled Ware lock and it gave me the leeandstort site, which as you know, I referred to on the Herbie blog. I've been to busy to study other folks blogs over tha last day or two, so I hadn't seen yours at that time.

Do you believe in telepathy?

Nah. It's just a coincidence. I'd looked up "Ware weir" after a comment left by someone called Martin.

Martin, if you're there, thanks!

Not at all, glad my attempt at humour led to something......