I mentioned the other day that our (gas-fired) central heating system had stopped working. The symptoms were these: the boiler would fire up and heat the hot water, but wouldn't heat the radiators if the central heating was "on". If CH alone was selected nothing at all happened. The boiler just sat there, pilot light on, but otherwise lifeless. 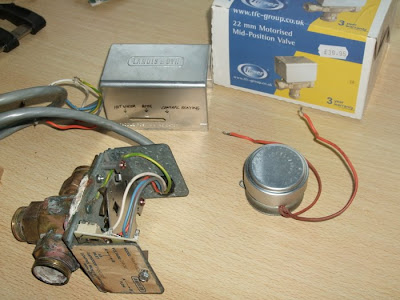 Last night, spurred on by the prospect of there being 12 people here at Christmas, I started fault-finding. I had already suspected the synchronous motor which drives the three-port valve (routing hot water from the boiler to the hot water cylinder coil or the radiators or both), so I removed it and tested it. 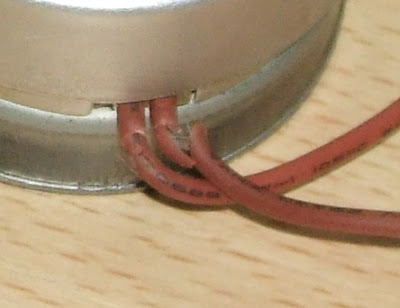 Fortunately I had replaced one of these in the past, so I knew what to do, even though the fitting to the valve was a slightly different design. While removing it I noticed that the leads had become brittle with the heat, and the insulation was cracking where they entered the motor housing. The motor itself was open circuit, the winding having presumably burnt out. Not good! It's designed for a high-temperature environment (obviously), so the manufacturer must have been saving money by using lower quality lead-out wires. 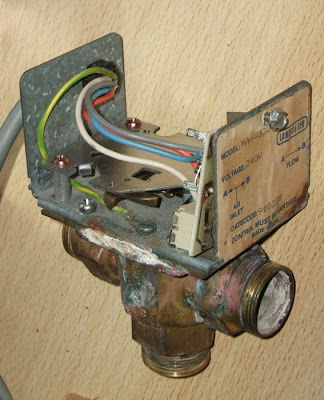 The motorised valve in the photo is the one I removed four years ago after it had done 16 years' service and disintegrated internally. During that time I had had to replace its synchronous motor: it was that (relatively new) replacement which I re-installed yesterday. Now the system is up-and-running again.
Posted by Halfie at 22:31

Halfie
Is the round synchronous motor a bit that fits inside the box housing? When mine failed I never thought to replace an element and instead I simply removed the whole three way junction, complete with electronog valve, and bolted a while new one on. It was about 18 years old so it didnt owe me anything.
It was exactly the component I thought you were referring to.

Do you mean the house is going to be warm enough for us not to wear our fleeces? That IS good news.

Andy, yes. Once you've loosened the screw which holds the aluminium cover, and removed the cover, there are just two small screws holding the motor (or just one screw and a lug you have to bend out of the way in the Tower brand replacement, the one I fitted four years ago). The motor just lifts off. What you can't see in the photo is the small gear wheel sticking out underneath the motor housing. This engages with a toothed curved piece of metal which drives the valve.

H.S., I'd suggest you bring your fleeces anyway. Our house doesn't get as warm as yours! We will have the woodburner going, though.

What a clever husband I have!

H.S., I wouldn't bank on it! I wear a fleece all the time in the winter. Anyway, what's wrong with fleeces? Lovely comfortable garments!

In that case, I shall bring my thermals!