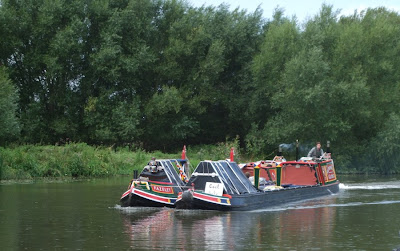 As we were making our way up the Thames in August we passed laden breasted-up Joshers Clover (motor) and Fazeley (butty).

We were heading for the head of navigation before returning to Beale Park for the IWA Festival; I guess they had come onto the Thames at Oxford and were going straight to Beale Park.

******************
Today we did more work on reducing the bonfire pile. Despite a couple of sharp showers it was still smouldering, so we got it going properly again and loaded more on. It was hard work: the "feed" pile had compacted making it difficult to get the fork in to lift chunks onto the fire. The pile has noticeably shrunk now, but there are at least two large trees which need to come down. The non-loggable bits from them will create another large pile. (The larger branches and trunks, though, will keep us in logs for another year!)
Posted by Halfie at 22:37