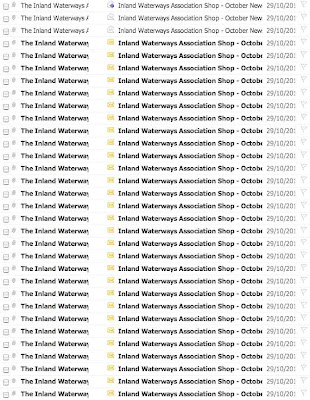 Did any other IWA member get 32 copies of an "October Newsletter" from the IWA Shop?*

Just to see what would happen I clicked to choose two packs of Christmas cards, and the shipping charge goes up to a whopping £4.50! They'd send you 50 - yes, FIFTY - standard steel windlasses for the same shipping cost! How can a hundred cards cost the same to send as a hundredweight of bulky windlasses? 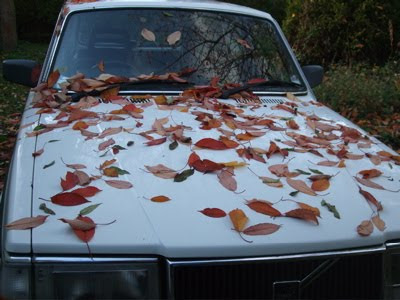 Today I have been raking leaves, an occupation which doesn't greatly trouble liveaboards. (Leaves on the boat can be a nuisance but I doubt many people use a rake to clear them!) The cherry tree decided to drop most of its leaves on the car. Or so it seemed.

*Update: An apology from the IWA for the multiple mailings has been sent out. It reads

Thank you for contacting us regarding the inconvenience caused last Friday evening by the receipt of multiple copies of an e-mail from iwashop.com. This e-mail, although generated by ourselves, is subsequently submitted to a mail server at a third party server provider.

Following an extensive investigation we now know what happened and why you will have received between 2 and 40 e-mails. The server ran out of disk space and was increasingly unable to log successful sending of an e-mail to an address. In this circumstance it kept trying until it logged the successful sending of the email.  As the problem worsened so the number of unsuccessful attempts increased, until the server collapsed at 9.00pm on Friday29th October about 2 hours after beginning transmission. This did fortunately limit the number of people affected.

As you were one of the people affected by this malfunction we would like to extend our most sincere apologies for any inconvenience or distress caused. The problem has been rectified by our mail provider and is highly unlikely to ever happen again.

Your support is very important to us and we hope you will continue to support the Inland Waterways Association in the future.

Yes, I did too. I even started a thread on the Canal World Forum about it, to see if it was just me.