We noticed last night that the Farmer's Bridge flight seemed to be set in our favour, so we got up reasonably early hoping to be the first down the locks. While we were having breakfast, listening to the rain, at least one boat went down, scuppering our plan. Then Edwin appeared on Ferrous with his remote control at the ready.

As we were no longer in a rush we attended to the boat's needs at the services before entering the flight in the pouring rain.

By Lock 4 my shoes had so much water in them that they squelched with every step. My hat and coat performed well, though. Did I mention the rain? We had planned to be in Fazeley by Wednesday evening so we were on a schedule. Having done just six locks in the previous two weeks we had 27 today, all but one against us. At least it wasn't cold, and once you're wet you can't get much wetter.

I don't remember ever seeing overspill weirs doing their job with so much vigour. 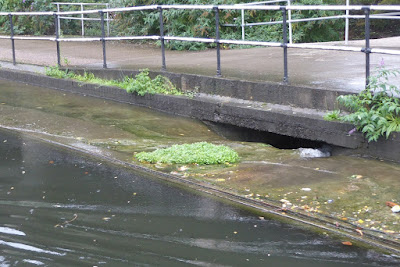 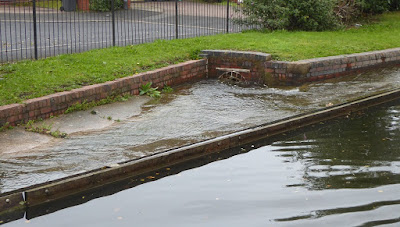 One of the new houses where (I believe) the Cincinnati works used to be has made a big effort with the bank, mowing the grass and putting in many potted trees. Incongruously a bus stop stands amongst them. 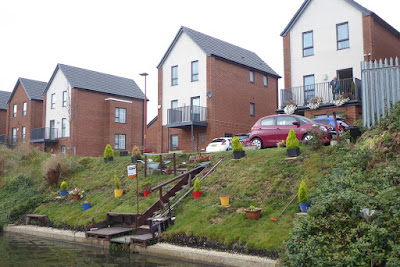 I'm pleased to report that the new well deck paint doesn't seem to have suffered in the rain.
Posted by Halfie at 21:22

Methinks a "Midland Fox" bus would be a bit off-route on the Birmingham & Fazeley.

So that's what it says after "Midland". I couldn't decipher it.