How many volunteers does it take to empty an Elsan tank?

One thing we've been doing at the Black Country Boating Festival is running the boat race game. This is primarily intended for children, but when a pair of PCSOs walked past it was too good a photo-opportunity to miss. The idea of the game is to use a straw to blow a boat along a miniature canal, and get it to the other end before your opponent. 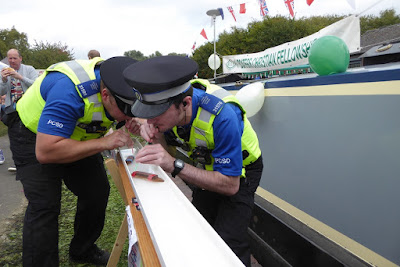 This was yesterday, when the weather was again very obliging, encouraging the crowds once more.

In the afternoon Jan and I were brought to the main marquee on some pretext … and we found ourselves being presented by the Mayor of Dudley with a trophy for "Volunteer of the Year"! This was completely unexpected. Indeed, there were plenty of other volunteers equally - or more - deserving of the award, so I accepted on behalf of the team. 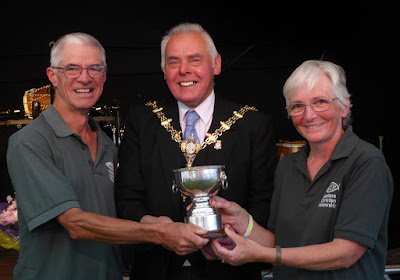 We'll have to come back next year, if only to return the cup. (But we have already booked in as this is one of the best festivals on the calendar.)

As usual there are few photos of me actually doing anything as I'm usually the one behind the camera. So this is the dismantling of the marquee on Sunday evening by some of the other volunteers. 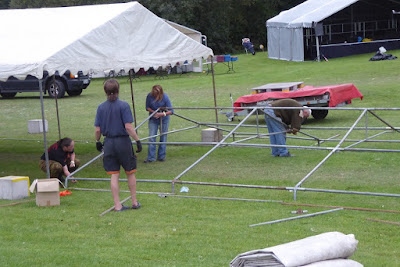 It was good to get it down and packed away in the dry; last night it rained. Today we continued with the break down. One part of this was to empty and rinse out the Elsan disposal container. This attracted a surprising number of volunteers simply looking on. 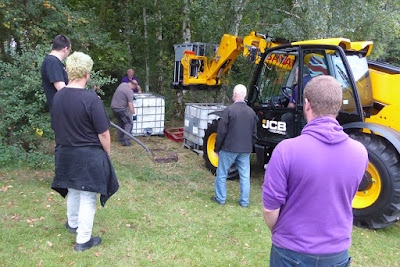 What is the attraction of poo? There were even more observers who didn't make it into the photo.
Posted by Halfie at 22:42