Spotted on a boat at Lower Shuckburgh. 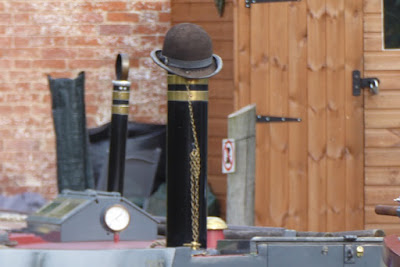 Today we travelled from Weedon to Calcutt. It was much less windy than yesterday, but considerably cooler. We also had a few spots of rain, but that was all.

I forgot to say yesterday that we went to the Brinjol Indian restaurant in Weedon for "banquet night". I chose the wrong things (not hot enough) but was certainly full at the end. The place was busy; the waiters were dashing about all the time. The kitchen must have been rushed off its feet.

An hour after leaving Weedon today we were at the Buckby flight. As we ascended we had two locks turned in our face. Hmm. So much for saving water. And there was a fair selection of grumpy boaters. This was offset by a lovely family on a hire boat we shared Calcutt Locks with. They were returning to Stockton Top after a two week holiday which they loved.

Leamington Spa for us tomorrow, so it's another early(ish) start.
Posted by Halfie at 21:51

I took that very same photo the other day as well