An alert from CRT yesterday warned of a mini digger which had fallen into the canal in Cosgrove. so, of course, I looked out for it. Here it is. 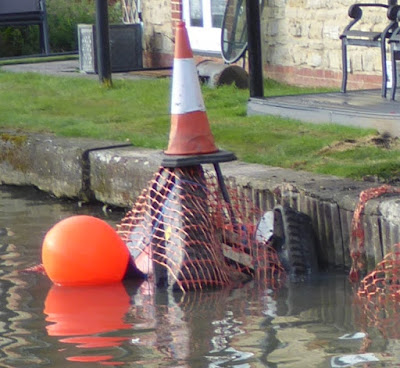 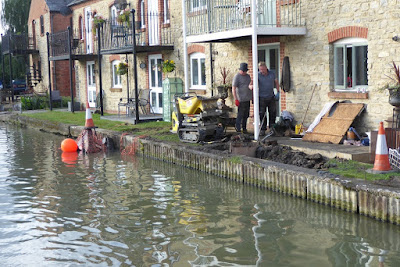 The cows had it right - it rained a little today. But not until we'd tied up. The main weather story today, though, was the wind. It was quite strong at times. 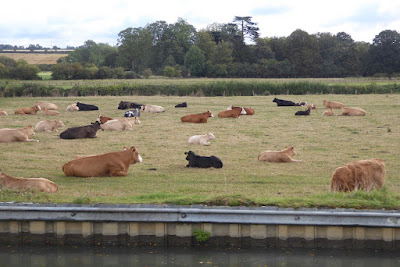 We made good progress up Stoke Bruerne Locks with nb Imogen … until we got to Lock 15. Here we had to wait 20 minutes while a CRT team cleaned the weed from the gates and lockside. 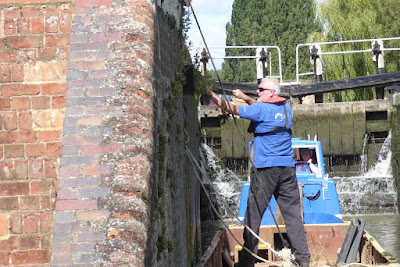 I was told that this was because CRT Chief Exec Richard Parry was coming to the Village at War festival this weekend. 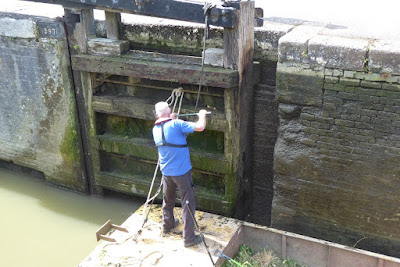 Outrageous! He should see the waterways and locks as they are, not tarted up for his benefit. He is not the Queen. CRT, you should fix leaking locks not waste resources cleaning weeds unnecessarily.
Posted by Halfie at 23:44

I think Richard Parry sees plenty of the canals as they really are, and probably sees far more of them than any of his predecessors did. I'd be very surprised if a lock were being tarted up just for him (unless the local CRT people were thoroughly ashamed of the state it had got into) ... no bad thing to smarten up for a public event though is it?

Sarah, you are absolutely right. I was picking up the bad vibe from the person who told me it was for Richard Parry's benefit and wrote without enough consideration. I suppose I was comparing cosmetics with deeper lock maintenance, but they could both be seen as important. I have a lot of time for RP; he manages to get to waterways events all over the country where he has time to talk and answer questions.