Meal out rounds off a day of maintenance

Here is the promised photo of the Morse control, looking from the back. At the top you can see the two metal clips, the right-hand one of which had slipped down to prevent the lever moving beyond the tickover position. 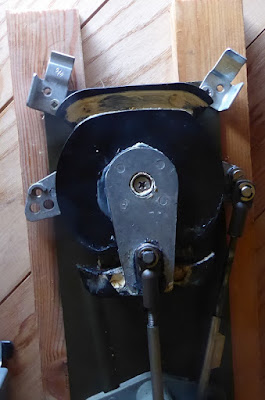 I spent some time baling out the bilge sump under the stern gland. A lot of water had appeared there over the last couple of weeks. Could it all have come from the stern gland? I have a drip catcher which has been filling more quickly than it used to, so I tightened the stern gland a little and mopped up all the water I could. Something to keep an eye on.

Another repair job was to get my bike sorted out. It had lain unused for months with a flat back tyre. My tardiness in getting round to fixing it was because I had thought that the hub gear cable would need to be removed before I could get the wheel off. In the end I found that not to be necessary, and I successfully replaced both the inner tube and the outer tyre. The old inner tube had 16 repair patches! 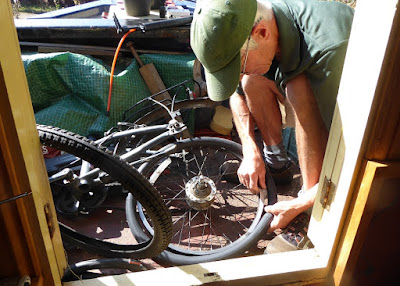 This evening we went to Mad O'Rourke's Pie Factory just up the road in Tipton. We were part of a party of ten and had a most enjoyable time. The Lumphammer Bitter (3.6%) was by far the tastiest ale I sampled (beating Sledgehammer (5.6%) and the Ruby Mild (6.0%). 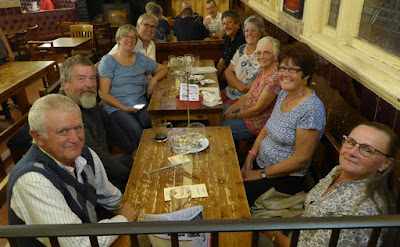 L-R: Keith, Colin, Helen, Andy, Tim, Tracey, Sue and Jo.  The chap at the top of the photo with his thumb up is photobombing.

I'm hoping to organise a similar meal out in two or three days, to a curry house.
Posted by Halfie at 23:00