Boat launching ramps on the Dudley No. 2 Canal

This morning we had a leisurely breakfast, but then returned across the grass to help with the final phase of clearing the site after the festival. There was still the kitchen marquee to take down and load into a trailer and a container. We got away (at last) just after midday, when we boated down to Hawne Basin to get diesel and gas. The diesel was got, but the gas wasn't as they'd sold the last cylinder this morning.

On the way down I spotted something I don't remember seeing before: wooden ramps leading from the bank into the canal. 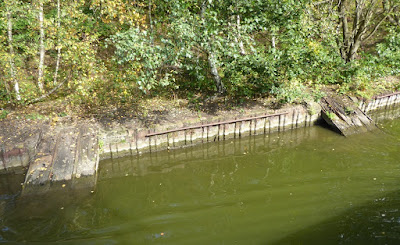 I was told these are ramps used to launch boats made in the boatyard there. There is little other evidence of the boatyard remaining; the area has returned to woodland.

The sort of boats constructed were, I am told, Joeys (or dayboats), an example of which is tied up by the former Stewarts and Lloyds Tube Works.

It was about 4pm when we got back to Windmill End Junction. As we were in no particular hurry to get anywhere we decided to return to our festival mooring for the night. Many of the BCBF team were still hanging around; we found ourselves invited to an impromptu al fresco meal of faggot, baked potato and veg. It was most pleasant sitting in the evening sunshine enjoying a glass or two and a chat. 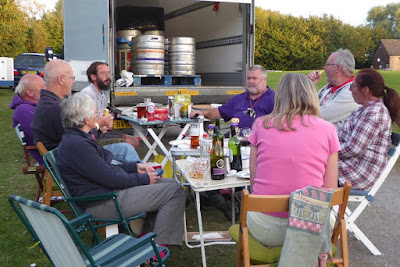 I don't know why everybody looks so glum in my photo!

After that Tim and Tracey of Sola Gratia came over for drinks. We have more or less decided to go to the Tipton boat festival this weekend so we'll probably head there tomorrow.
Posted by Halfie at 23:43