After going to Saltisford Church this morning (good sermon on Mission Impossible) we went to the Cape of Good Hope for lunch. In my change I got my first plastic fiver. Not sure if I like it yet.

The wall in the gents is papered with pages from old copies of Waterways World. 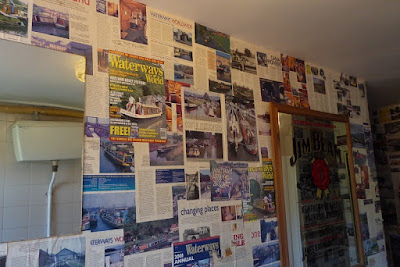 And here's the five pound note. 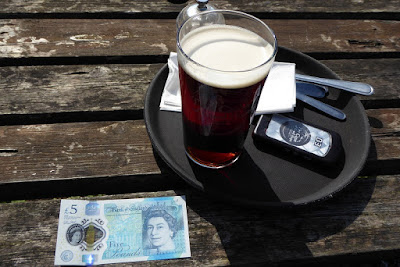 After lunch we set off down the Cape Locks, stopped for Lidl (and Morrison's) at Leamington Spa and tied up above Wood Lock. All the locks were in our favour, unlike Hatton where I had to turn nearly all of them. Did I mention that on Friday we did 38 locks?

Approaching Leamington Spa was a tug ... 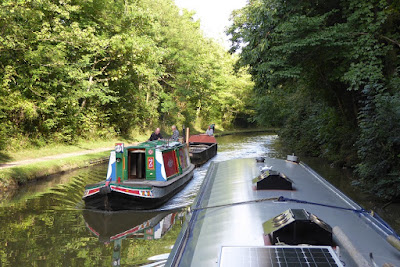 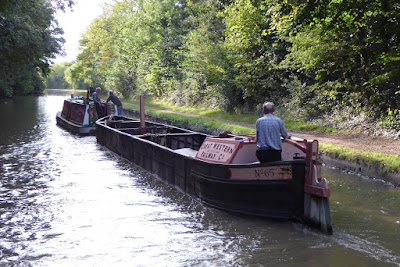 The rain forecast for tomorrow seems to have been put back until the afternoon, so we'll try to get the remaining locks to Wigram's Turn done in the morning. An earlier start than usual is called for, methinks.
Posted by Halfie at 23:59

Anonymous, I'm sorry, I didn't catch the tug's name. Zooming in on the photo doesn't help much. All I can discern is the name on the water can, which is Claire, and the letters BHP in a circle on the side. I can almost convince myself that I can make out the name Enterprise, but it really is not distinct enough. Hope that helps.