Well, not necessarily the man himself, in person*, but filming for a Stephen Spielberg production caused us to be delayed for half an hour in Birmingham today. The film is Ready Player One; I don't know if it will use any canal shots. The location operative below asked us to wait while a drone with a camera filmed some action taking place to the right. 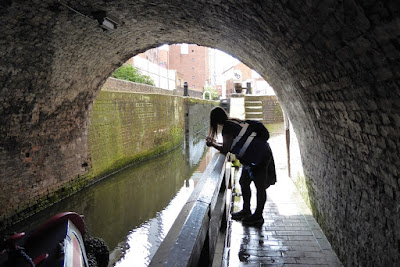 The drone - I'm calling it that because that's what she called it - hovered directly over the pound above Lock 12, I think it was, on the Farmer's Bridge flight for 30 - 60 seconds or so before disappearing off to the right. 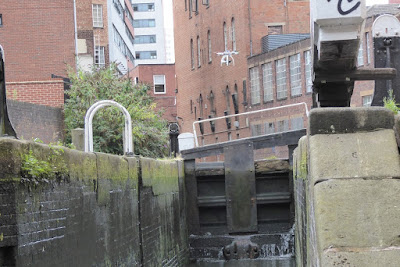 That's a serious piece of kit. 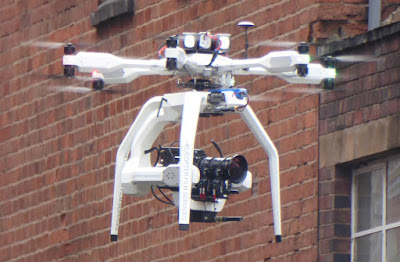 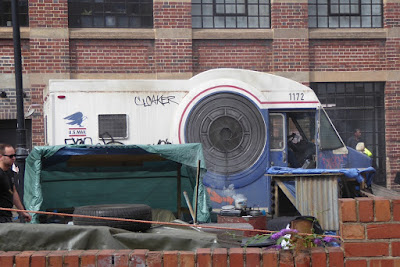 We agreed to wait. But the production company was naughty. It had not cleared the filming with CRT; they found out that filming was taking place only today. They didn't know that boats, cyclists and pedestrians were being stopped. At the time I was surprised not to have received a notice alert, nor was there a CRT person anywhere in sight. When we were at last allowed to proceed we got to the top of the locks and I called in to the CRT office to tell them.

Still, it added extra interest to the travelling today, all 27 locks of it. I took lots of photos of other interesting things today, but there is not the time nor space for me to share them now.

*According to the Birmingham Mail Mr Spielberg was indeed in Birmingham to oversee the set.
Posted by Halfie at 23:59

One would hope so, but I wouldn't be surprised if nothing happens...