Recycling on the waterways? Don't you believe it

At the bottom of Stoke Bruerne Locks there is a "customer waste facility". In this one, as well as the skips for general waste is a wheelie bin marked "Glass only". You would think that this would be for recycling. You would be wrong. 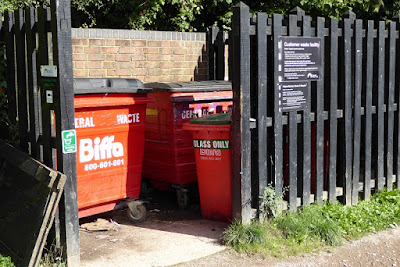 I witnessed a Biffa lorry come and empty the large waste skips into itself; then the operator emptied the bin with the glass in into the same lorry. Now, admittedly, the wheelie bin didn't claim that the glass would be taken for recycling, but that would be the assumption anyone would make. What a waste. It will all go to landfill. CRT should either arrange a separate collection of the glass, or remove the bin or its labelling.

Jubilee is now back at Thrupp Wharf Marina. We got back yesterday; this is Lock 16. We had only four more after this, and then a similar number of miles. 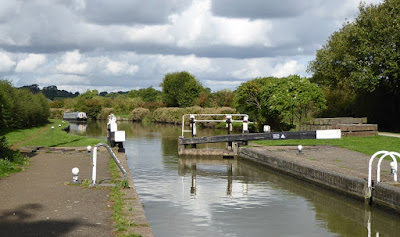 We had been away for so long that we couldn't remember which was our pontoon; fortunately we recognised our neighbour and slotted into position. It felt a bit of an anticlimax coming back, but we've had an excellent time away which many would be envious of.

After checking the car started - it did - we did some packing and I washed the car. We ate with Ally and Ben, slept on the boat and drove to Essex this morning to join the celebrations for Jan's mum's 91st birthday.

I took this photo on the way to Wolverton yesterday. 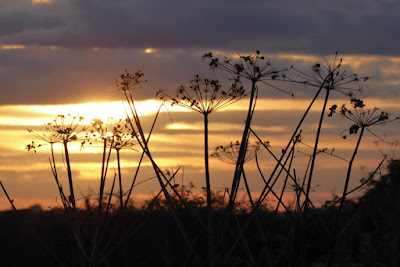 Adrian says that at Hawkesbury, where there's a bin which actually says mixed recycling on it, it's the same colour as the general waste bins,many full of rubbish anyway. I also suspect it also ends up in the same lorry. If recycling is going to work, at the very least the bins should be a different colour, so people realise.

Do you ever look at it from the refuse collection side?
The additional cost of re-cycling has to be paid for somewhere along the process.
Typical additional costs would be separate lorries, additional manpower to have them on the road at the same time as the normal lorries, perhaps buying towed trailers for separate waste, land for the separated storage. Then there is the transport to the dedicated recycling plant, be it glass, aluminium, ferrous metals, etc.
All has to be paid for by someone, either by the people who convert crushed glass, or metal, into something else, or by the people paying for the waste disposal, CRT in this case, which means you.
The only other driver is to increase the cost of landfill, so it is more expensive than the costs of recycling. This high cost, passed on to end users (ordinary people) then increases the amount of fly-tipping or dumping, which society demands be cleaned up, at cost to the rate payer.

Those specially marked bins were created when it was economic to treat waste separately; it would be a waste to throw them away just because the economic cycle has swung. I don't think BIFFA are fools, I doubt they are combining waste just because they can't be bothered.

CRT may be an easy target, but I think it's the wrong target.
I have no commercial or personal link with the waste disposal industry.
Regards.

I was told not that long ago that the recycling companies now have much improved sorting facilities, so although all the waste is taken away by the same vehicle it gets separated at the depot into various "bins" for onward transport to either land fill or appropriate end users.