The computer's battery died without warning last night so here are two days' worth of blog posts in one. Yesterday morning started with sunshine (we had a small amount of rain later); here is Nansen II preparing to tow Leo from the Black Country Boating Festival. 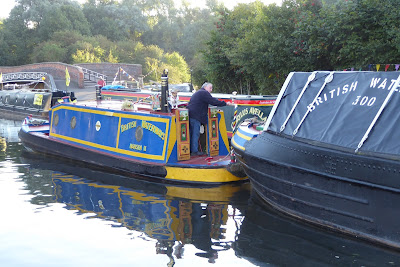 The butty looks huge compared with the tug. 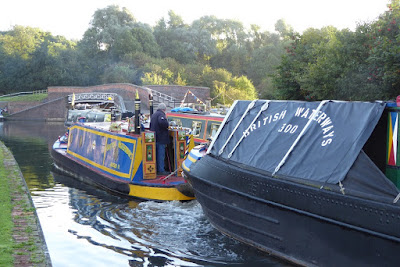 The combination will steer better with a tiller; it took a moment or two for the steerer to realise that the rudder was still tied back to the stern. 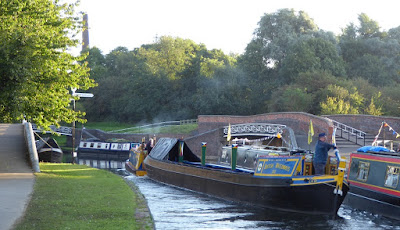 This is what I have been doing a lot of over the four and a half days we've been here at Windmill End: litter picking. 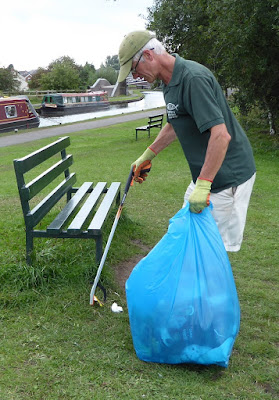 Jan has done a lot too, as well as helping in the office, table clearing and cleaning, marquee dismantling etc. Yesterday was a rubbish day. I shifted vast amounts of the stuff into skips.

In the evening we went for a meal at Ma Pardoe's, aka The Old Swan, in Netherton. I had an excellent lasagne which came with a load of delicious molten cheese on top. Barry and Sandra from the Homebrew boat Areandare joined us for drinks later.

And so to today. We went down to Hawne Basin for diesel and gas. Poor Jenny, who was manning the shop, was struggling with the computerised system and managed to overcharge me by mistake for the fuel - to the tune of £23. I realised only after we had returned through Gosty Hill Tunnel. We stopped and I phoned her; she apologised and implied I wasn't the only victim of the computer problems. I'll have to phone again tomorrow to give them my contact details and sort out how I can be refunded.

As we approached Gosty Hill Tunnel we observed two people acting strangely by the portal. At first we thought they were graffiti vandals; when we got closer it seemed as if they were inspecting the brickwork. When I asked them what they were doing they told me they were geocaching. 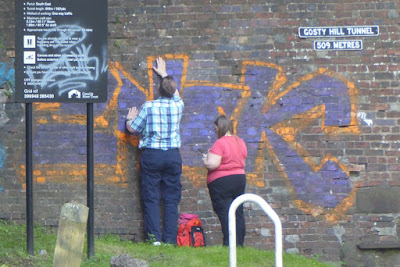 Jan steered through Netherton Tunnel; on the other side and all the way to Birmingham I saw quite a few herons. Most were on the bank; this one was high in a tree. 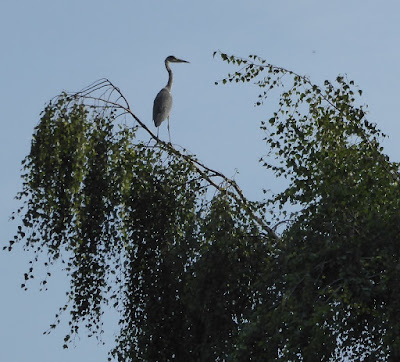 A minute or two before we arrived at the services at Cambrian Wharf we found ourselves under a sudden thunderstorm. The lightning and thunder were accompanied by heavy rain. We tied up on a pontoon at the wharf; shortly afterwards the rain stopped.
Posted by Halfie at 22:28

Geocaching? A new word to me. I have looked it up since and am little the wiser. By the way, have you kept last Saturday's Times magazine? If so, take a look at the chess board in the Terence Conran article. H.S.

Where 2 worlds collide... I love narrowboating and geocaching, too...

I have a hire boat on the L&L next week specifically to indulge both hobbies!

(Incidentally, I checked on the Gosty hill portal cache - your players referenced did not actually find the cache hidden there...)

H.S., obviously no chess players in the room!

Martin, enjoy your trip on the Leeds and Liverpool.