That tilting feeling in the night

At 0430 I woke up to find I'd rolled into the middle of the bed. Very much Jan's territory - so what was going on? I got up and tried to walk across the floor. Either the half pint of HPA (one for Jim, that) was much stronger than the billed 4.0% and had a delayed action, or the boat was on the huh, as they say in Norfolk. The tilt was pronounced and the level of the pound was clearly down, but it didn't seem bad enough to warrant doing anything about it until a more reasonable time, so I went back to bed. 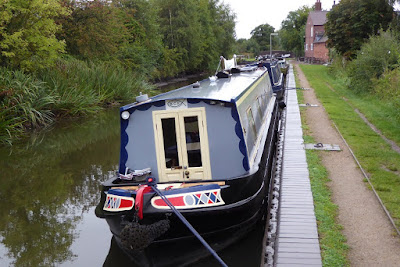 The lock below seemed watertight - all paddles down and gates shut - so the pound itself must have sprung a leak somewhere. This is between Curdworth Locks 8 and 9 on the Birmingham and Fazeley, the pound which includes the Dog and Doublet pub. The pound above was longer with plenty of water and its level barely altered when I sent two or three lockfuls down. 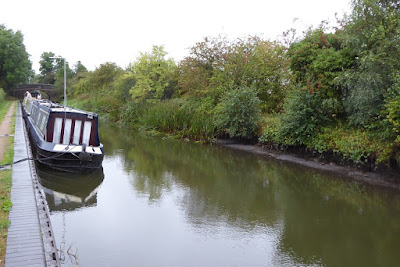 Continuing up the Curdworth flight one of the bridges has a bit of an identity crisis. Is this Broad Bulk Bridge? 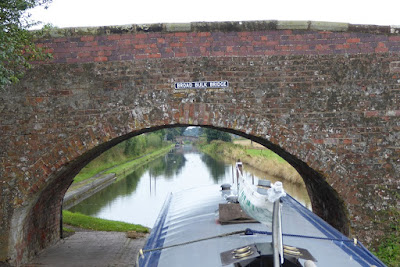 Or is it Broad Balk Bridge? 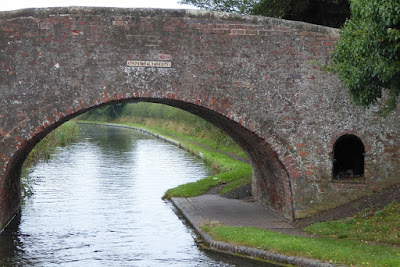 Broad Balk looks the older sign, but Nicholson - not infallible - has it as Broad Bulk.

We stopped at Minworth, below the three locks. Tomorrow we'll whizz up Aston and Farmer's Bridge Locks.
Posted by Halfie at 22:59

One of the (few) things I miss about Hereford is Wye Valley Beer. I often used to suffer from "tilt" after a visit to The Barrels😀

We passed you on Sunday morning on our way to Fazeley Mill marina but it was midday so you would still have been in church. We walked through Fazeley later in the afternoon but you were on your way by then!
Debby

If you'd rolled into the middle of the bed, where had Jan gone? She hadn't rolled out completely, had she?

Debby, sorry to have missed you.

Adam, I think she was just about managing to hang on in there!

We had the same problem in that pound. We had to let water down to refloat SONFLOWER after we had stopped at the Dog and Doublet for a lengthy meal. It appeared that more customers s depart down the flight than up it so the pound gets depleted!