It's happened again. I was too tired last night to write the blog so here are two days' worth. We woke up on Wednesday morning to a fresh and sunny Cambrian Wharf. 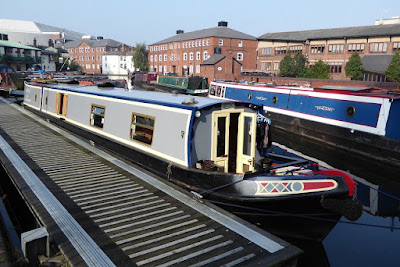 We reversed out of the mooring, winded and headed for Worcester Bar where we joined the Worcester and Birmingham Canal. At Edgbaston we paused to chat to Peter on Solar Kingfisher. A little before King's Norton Junction we had to wait while a contractor's boat cleared a fallen tree from the canal and towpath. 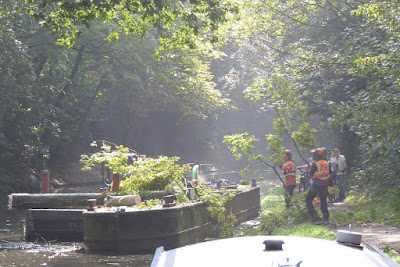 We were eventually waved on past; as we did so I remarked that there was a nice load of logs for someone. Immediately I was offered some; this was my haul. 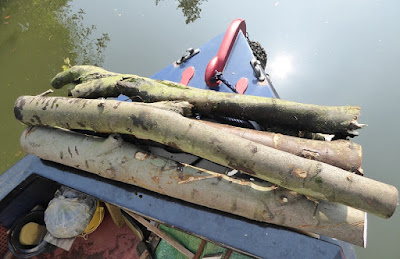 And this is the result of applying the bow saw later. 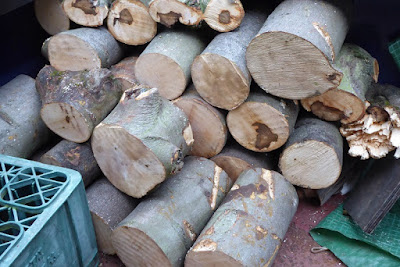 As we made the sharp left turn onto the Stratford Canal there was more work going on. 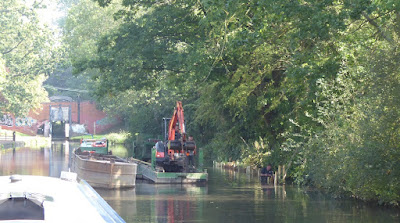 This time there was actually someone in the water, trimming off the tops of wooden stakes securing coir matting. 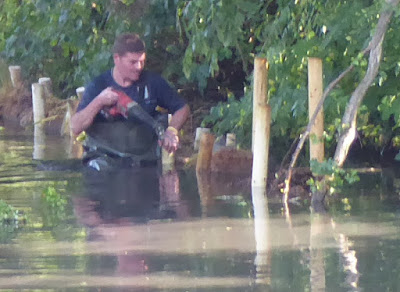 We tied up at Bridge 5 (Yardley Wood Road) where I did the log sawing. In the evening we went to our favourite curry house, the Sweet Chillies, for a lovely meal.

This morning I got a surprise as I looked out. Fog. 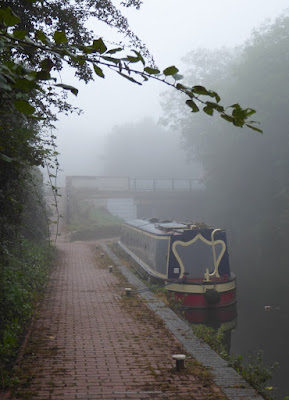 By the time we'd chatted to Dave who is renovating Canal Cottage, watered up and had a brief conversation with Brian and Diana on Harnser who came along the fog had gone to reveal sunshine. 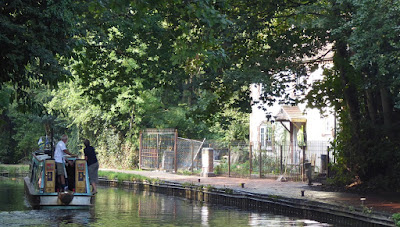 One of the reasons we had reversed to the water point was to get out of the way of contractors pressure washing the brick towpath. 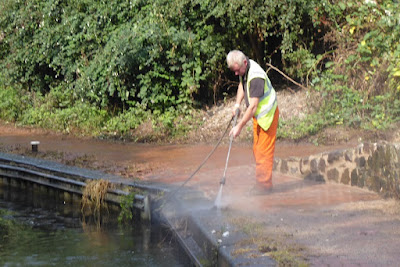 Our journey down the Stratford was uneventful until, just before the top lock of the Lapworth flight, a hire boat appeared in front. They were quite slow, and we had planned on having a barbecue in the long pound below Lock 5. To speed them up I cycled ahead and set the locks for them. Returning from setting Lock 5 I dinged my bell as I came up behind a man walking his dog along the towpath. This turned out to be our friend - and my former colleague - Ian. This unplanned meeting quickly turned into an invitation for him to join us for the barbecue, so we stopped above Lock 5 in the sun, lit the BBQ and had a really enjoyable evening. At one point Ian's friend Clive joined us for a drink. Clive used to be the chairman of the IWA. Ian gave us a top tip for a curry house in Warwick, so we'll go there on Saturday and check it out.

It was good to see you, Ian, and good to catch up on some BBC news.

Tomorrow's plan is to finish off the Lapworth Locks and get to the top of Hatton, leaving that flight for Saturday's little workout.
Posted by Halfie at 23:04