We carried on down the Lapworth flight this morning and had the luxury of a volunteer lockie for most of it. Lock 20 was the last narrow lock we'll be doing for six months; it's all wide locks from now on. 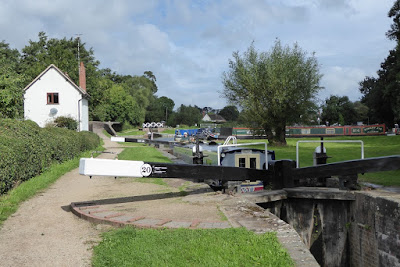 We stopped for lunch at the top of Hatton Locks and then ... as it was perfect locking weather we decided we might as well knock them off as well. 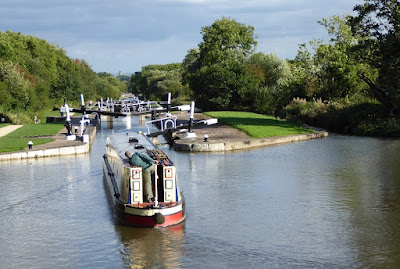 Many of the balance beams have been fitted with "Danger of falling" signs. 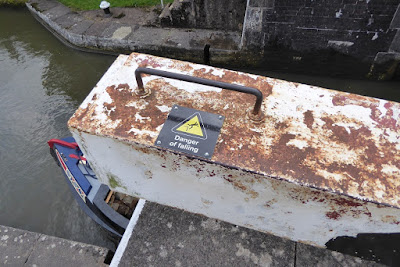 Rather nanny state-ish. What's next? Trip hazard signs by the raised bricks you push against to move the beams? 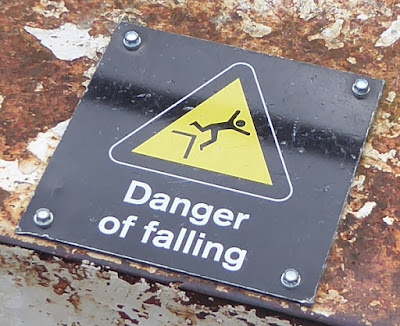 After an abortive visit to the Saltisford Arm looking for a mooring - no-one offered a breasted-up mooring although lots of people were in, and the winding hole was obstructed by a boat with a bicycle on the back making things very difficult (we reversed all the way out in the end) - we tied up near the Cape of Good Hope and went to the Warwick Spice for a curry. 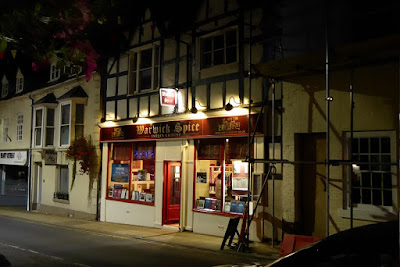 This was on Ian's recommendation from yesterday and was good.
Posted by Halfie at 23:59

On our first trip this year we met the chap whose accident may have prompted the signs - he was opening or closing one of the bottom gates, fell and broke his collarbone. Luckily they were near the top and one of the CRT staff drove them to the hospital and collected them later to bring them back to the boat. They were on their way back to Wootten Wawen when we met them and couldn't praise CRT highly enough.
So nanny, but with a reason!
Debby

I think they've put them on the locks where the balance beam sticks out beyond the raised bit.

RE Health & Safety notices, I have often thought that if someone suggested today that people should be allowed to navigate the canal system without any training, experience or any safety equipment they would be laughed out of court. Let's be grateful that people started doing it years ago when no one worried about such things.

We were in Saltisford, and I waved as you went by.
I got out of the boat to invite you to breast up, but you had reversed towards the winding hole. I assumed you were turning to reverse back down the arm, and so waited for you to re appear. I checked after a couple of minutes and you were in the winding hole. The next time I looked, you'd gone. You could have breasted to any of the boats, if Ian had been here (he finished at 5.30pm) he would have undoubtedly directed you to breast up to the first boat after the winding hole. Sorry I didn't catch you.
Rog
nb Paneke
janenrog@gmail.com