We set off from Braunston, knowing that we would be joining the queue for Buckby Locks later on. There was a problem with a bottom gate paddle necessitating the draining of a pound for its repair. We topped up with water and emptied the Elsan just past the A45 road bridge and shared the Braunston Locks with Chris and Jennifer on Pearl, a Wyvern hire boat. 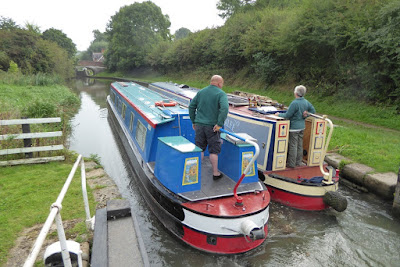 In Braunston Tunnel we encountered a boat with its tunnel light pointing straight in front and thus dazzling oncoming boats. If this wasn't bad enough the boat had come to a complete halt, although - fortuitously - staying on its side. Pearl, following us, reported that they had the same problem, only the back end of Boaty Dazzler had drifted across, leading to an inevitable collision. Apparently the boat had even switched off its engine!

Just before the bridge at Norton Junction we joined a boat at the back of the queue for Buckby Locks. Hearing that it could be up to two hours before the flight reopened we had lunch. Then I got my bike out and cycled down to Lock 8 where the problem was to see what was going on.

CRT was just rolling up the orange netting having completed the repair. 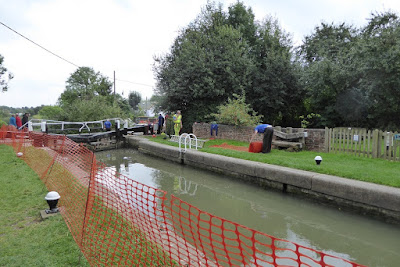 With the lock refilled it's impossible to see the repaired paddle frame; it's the other side of the gate, anyway. 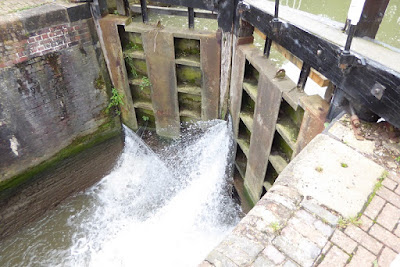 Another view of the scene. 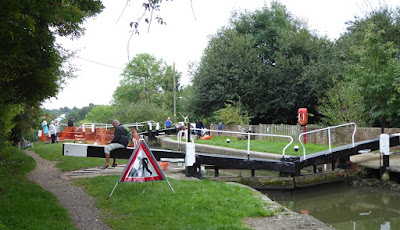 Withe the paddle frame repaired, and the lock filled to check it would be all right, it still took a while for the pound to be refilled. We eventually started our descent at about 1630, behind a dozen or so boats. We shared with Thetis. Rob was on his way to Ely, having bought the boat just 11 days ago. For someone who claimed never to have done any boating before he was a very competent single hander. 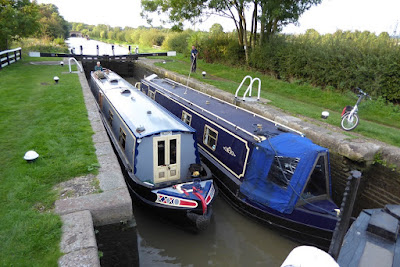 At the bottom we tied up for the night and I went back to help a couple of lock-loads of boats down the bottom lock.

Some boats had been delayed for more than a day; we were fortunate in being held up only for four hours. The original plan had been to get to Weedon; tomorrow we'll get to Stoke Bruerne and be back at the marina on Friday.
Posted by Halfie at 21:45