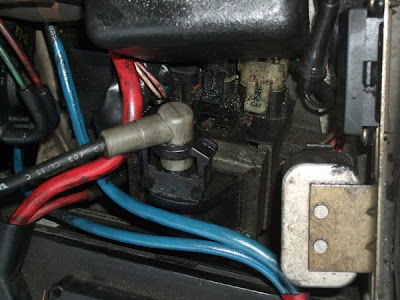 It's only the second major breakdown of our Volvo 240DL I can remember (the first time was in France when the clutch slave cylinder exploded). Last night Jan was driving along a dual carriageway with no hard shoulder when the car conked out. It was dark, cold and raining. She got out of the car, frightened that it would be hit by another vehicle, and phoned me. I phoned the police (the car was in a dangerous position), who eventually came and pushed the car to a slip road. I was meanwhile cycling from work to meet up. We called the breakdown service - all my tools were at home - and waited. Getting colder. After an hour and ten minutes help arrived. Our feet were freezing. The fault was quickly diagnosed as no HT, and traced to the coil or electronic ignition mounted immediately beneath the coil.

In a strange way we were both relieved that it was a "proper" fault: Jan pleased that it wasn't her being silly; and I satisfied that I couldn't have fixed it at the roadside.

There was no replacement on the van, so we were towed the three miles home.

After finishing work at 7, we eventually got home at 10pm. We had originally intended to go out for a meal - we ended up having soup and potatoes. Which was very nice.

So there's another job for me to sort.
Posted by Halfie at 12:00

I sometimes wonder how simple life would be without these jobs to do. A car and house generates many more times the work a boat does - I have spent the last three weekends clearing the loft and now I can decorate my top bedroom and bathroom..... Makes me worried I'd get bored on the boat all the time ??

Good luck with the car fix

Thanks Nev, and don't worry, I'm sure Murphy's Law will apply!