Borrowing a flash in Crick Tunnel 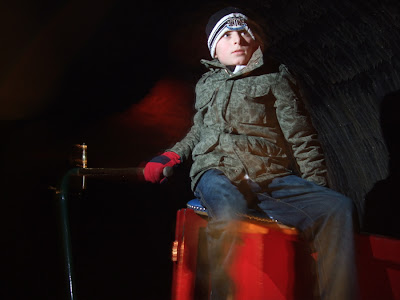 Looking through this year's photos, and wondering what I could write today, I came upon this picture of my nephew, Fergus, steering Shadow through Crick Tunnel in February. At first glance I thought, oh, a flash photo. But then I noticed the blurry legs and the zig-zag trails on the tiller pin. Calling up the metadata I see that I used a four second exposure. My brother, standing out of shot to my left, has evidently taken a flash photo during the time my shutter was open: see the shadows in the face and on the tunnel wall. My own flash was off; and the camera shake shows that I didn't use a tripod.

The more I study this, the more I see how many things came together to add to the effect. The trails from the tiller pin happen to be in the "right" direction, conveying the sense of forward motion; the combination of blurriness and relatively sharp elements aid the sense of movement; the flash being offset gives depth to the image, often difficult to achieve with a camera-mounted flash. I don't know where the red patch on the wall behind Fergus came from, though.
Posted by Halfie at 12:32