Another moderately early start: away at 0745. Well, it is only February, after all: we wait until summer for proper early starts! We had moored on a bendy bit of towpath, fortunately we were getting on and off at the back. 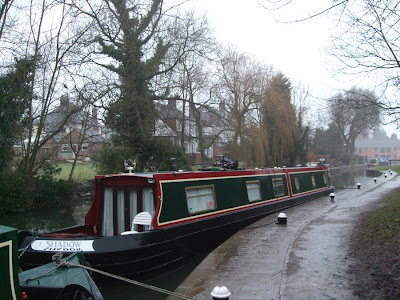 Returning along the Market Harborough arm we ran into some mist which had collected on the canal between two bridges. It was clear apart from this stretch. 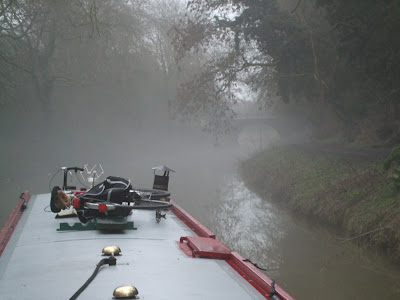 A little further on we met an apparently laden boat. I was fumbling with the camera and didn't catch the boat's name, but learnt from the steerer that it was built to look that way, i.e. laden. An unusual and evocative sight. 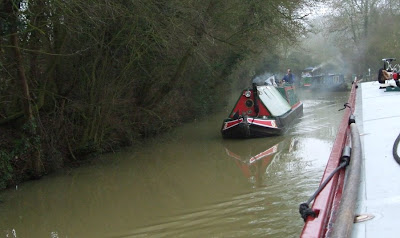 When Fergus wasn't steering he enjoyed operating the swing bridges. After this road bridge is a swing footbridge just before the junction with the Leicester Section at the bottom of Foxton Locks. 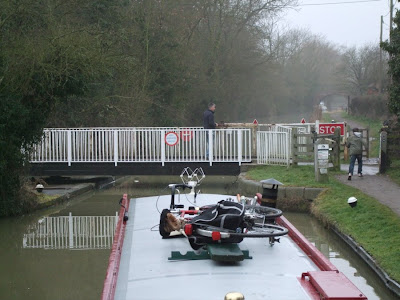 On our ascent of the locks the lock keeper suggested at one stage that I crack open a paddle to refill a leaking sidepond. He remarked that it was going to be interesting in the height of the summer if sideponds don't hold water - there's a second leaky one as well as this by the museum. 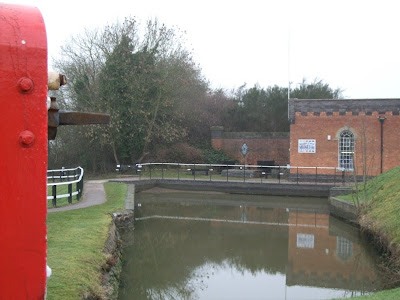 How do you find a leak in a sidepond, I wonder?

At 1345 we tied up at North Kilworth to await the arrival of crew shift two: no more cruising for me now. As this coincided with lunchtime, and as we had no mayonnaise to go with the tuna fish for the baked potatoes, I cycled a mile into what looked like the village to look for some. The closest thing to a mayonnaise shop seemed to be a garage, but they didn't have any. The spotty youth at the till told me there was no other shop nearby: perhaps I could get some in Market Harborough? Between the garage and the canal must be one of the most frightening roads I've cycled along: heavy lorries ignored the 30 mph speed limit and charged up and down the busy narrow road, buffeting me as they swept past. Penny and Jemima arrived and put their things aboard; then began the Great Car Shuffle. While David cruised peacefully (I assume) to Welford, I drove with Penny to Braunston to get my car. Penny patronised the butcher's, and then we drove in convoy to Stockton (Warks.) to leave Penny's car there. By the time we'd driven in my car to Welford it was dark, and David had been moored quite a while.

By now it was 6 pm, and I had to decide whether to drive straight home, two hours away, in time for choir rehearsal, or stay and eat before driving home in time to see everyone in the pub afterwards. My stomach decided that eating now was the better option; it was a shame the food at the Wharf Inn wasn't up to it. I ordered a rump steak, supposedly rare, which was tough. Tough on me for attempting to eat such a tough steak. And the peas were like bullets. Why am I such a bad complainer? I battled on, knowing that if I sent it back it would delay things too much. And I'd already eaten half of it before I realised how poor it was. We were all eating there: I must find out how the others got on. I left while they were still eating.

edited to help it make more sense
Posted by Halfie at 09:12